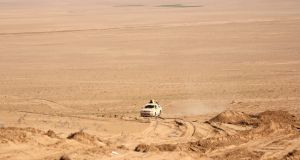 The outskirts of Raqqa, Syria. At least 33 people were killed in an air strike that hit a school sheltering displaced people near Raqqa. File photograph: Rodi Said/Reuters

At least 30 Syrian civilians were killed in an air strike by the US-led coalition fighting Islamic State militants in a rural area of Raqqa province early on Tuesday, according to residents, activists and state television.

The US-led coalition said it had no indications an air strike had hit civilians, but in its daily report on coalition strikes, the US military acknowledged that strikes were carried out in the area. It said that on Tuesday, coalition warplanes carried out 19 air strikes – an unusually high number for a single day – on a range of Islamic State facilities near the city of Raqqa.

The attack, which hit a school in the town of Mansoura, where civilians had taken shelter on Tuesday night, was the second time in a week that Syrians had accused the United States of involvement in a strike that killed dozens of noncombatants.

Forty-nine people died last week when US warplanes fired on a target in Al Jinah, a village in western Aleppo province. US officials said the attack had hit a building where al-Qaeda operatives were meeting, but residents said the warplanes had struck a mosque where hundreds of people had gathered for a weekly religious meeting.

The US military said it was investigating whether civilians had been killed in that airstrike. In Raqqa, the Islamic State’s self-declared capital, hundreds of people who fled their homes in other parts of Syria were sheltering in the school, according to residents and to the group Raqqa Is Being Slaughtered Silently, a team of activists originally from Raqqa who monitor the conflict.

The two air strikes have raised concerns about whether the US military has become less careful, or less selective, in its targeting. President Donald Trump repeatedly said during his campaign that he would loosen restrictions intended to protect civilians during attacks against the Islamic State and other extremist groups.

The attack came as US forces took a new step in their campaign against the Islamic State, also known by the acronyms Isis or Isil. On Wednesday, US Special Forces troops and members of the Syrian Democratic Forces, the name used by the Kurdish and Arab forces working with the US military in northeastern Syria, were dropped into territory held by Islamic State near the Tabqa Dam on the Euphrates River, as more Kurdish forces crossed the river to reinforce them. The school in the town of Mansoura was not far from that area.

Air strikes during the Obama administration also led to high civilian tolls, most notably during an operation last year in Manbij, when the city was held by Islamic State militants. Khaled al-Homsi, an activist from Palmyra who opposes both the Syrian government and Islamic State, said that among the displaced people at the school were families from Palmyra, which has changed hands several times in recent years, switching between pro-government and Islamic State forces.

Residents of Palmyra, an ancient city known for its Roman stone amphitheater, say they have endured bombing by government warplanes, harsh treatment and summary killings by the Islamic State, and reprisals and looting by pro-government forces retaking the area.