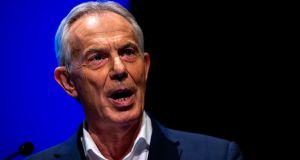 Former British prime minister Tony Blair: “We can change our political or legal or economic relationships, but we can’t change our history or our geography, our values or our interests.” Photograph: Chris J Ratcliffe/Getty Images

Tony Blair has warned the leaders of political unionism that their campaign against the Northern Ireland protocol is futile because if it could only be replaced by a similar set of arrangements. He acknowledged that the protocol was “a big problem” at the moment but said it was an inevitable consequence of British decisions during the Brexit negotiations.

“I don’t think Europe will agree to scrapping the protocol but even if it did, you’d just have to find another protocol. Because you could get rid of the protocol and you just go back to dealing with the original problem, which won’t go away,” the former British prime minister told The Irish Times.

He said Britain and the EU should seek constructive, practical solutions to the difficulties experienced in Northern Ireland because of the protocol but that success would require “a bit of give and take” on both sides. And two months after the Trade and Co-operation Agreement came into force, the former Labour prime minister expressed concern about Britain’s difficult relationship with the EU.

“I think it’s potentially a serious situation because if the relationship continues to be as scratchy as it’s been, it’s going to be a problem. It’s a problem because the situation in Northern Ireland is now not stable in relation to the Border. It’s a problem because there are many manufacturers, small businesses particularly, that are really suffering from the friction through Brexit,” he said.

“What this requires is real statecraft from the leadership both in Britain and in Europe to create elements of cooperation which get over the scratchiness and those elements are very clear and they’re extremely important for us to do . . . We can change our political or legal or economic relationships, but we can’t change our history or our geography, our values or our interests. And those are things we all share in common so we’ve got to make sense of this somehow. And it’s a big challenge and it requires leaders on both sides who are prepared to spend a bit of political capital in order to get the relationship in a good shape and that means not playing to their respective galleries.”

Mr Blair has been an unofficial adviser to Boris Johnson’s government during the most recent phase of the coronavirus pandemic, championing the strategy of offering as many people as possible a first vaccine dose while delaying the second for up to 12 weeks. He describes as “an obvious statement of fact” that Britain has handled the procurement and rollout of vaccines better than the EU but dismisses the idea that its success was made possible by Brexit.

“We could have done all of those things within Europe. I think what’s interesting is what Europe is also missing now from Britain. Because with Britain being part of Europe still, I don’t think you would have seen a situation in which vaccine acquisition was taken out of the hands of the nation states. It was never a sensible thing to do,” he said.

“I personally believe that any British government would have insisted on sorting our own vaccine programme out, especially as AstraZeneca was one of the main vaccines and invented here in the UK. So this will be a big political issue around Brexit but I really think practically Britain would have taken the same course even within Europe.”

Mr Blair gives credit to Mr Johnson for making the decisions behind Britain’s vaccine programme but he describes the political situation as very volatile so that it is uncertain how long any boost to the government’s popularity will endure.

“The question at the moment is all to do with the pandemic. But the political question will become later, who is best managing the recovery? And that’s a different question with different dimensions to it,” he said.

A recent uptick in the polls for the Conservatives has fuelled criticism within Labour and parts of the media of Keir Starmer, whose popularity has dipped during the past few weeks. Mr Blair dismisses criticism of the Labour leader’s performance, praising his efforts to restore the party’s credibility with voters after its worst general election defeat in almost a century.

“Fighting the government in the middle of the pandemic is a challenge because you’re the Opposition. No one cares what the Opposition says or does at the moment. I mean, why would they? The decisions are all taken by government. So I think what Keir has done is very important. He’s established himself as a sensible, rational, reasonable person, an intelligent person,” he said.

“The challenge for Labour is that it’s got completely to recalibrate its position and its thinking, and that takes time. But he’s got time. There’s not an election until 2024. I think he’s he’s made a good start and once the agenda switches to who’s got the best programme for the future, then you’re in a different political fight. Right now, it’s not very surprising that the Labour Party’s finding it tough.”