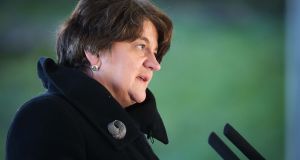 First Minister Arlene Foster: accused the European Commission of not respecting the views of unionists, who she noted were the majority in the North. File Photograph: PA Wire

The North’s First MinisterArlene Foster has accused the European Commission of being tone deaf about the impact of the Northern Ireland protocol, describing a meeting on Wednesday of the EU-UK joint committee as hugely disappointing.

In a joint statement after the meeting, co-chairs Michael Gove and Maros Sevcovic said they needed to work together to find pragmatic solutions to problems in implementing the protocol.

“The parties acknowledged the importance of joint action to make the Protocol work for the benefit of everyone in Northern Ireland. In that spirit, the EU and UK reiterated their full commitment to the Good Friday (Belfast) Agreement in all its dimensions, and to the proper implementation of the Protocol. Building on the recent outreach by the Joint Committee co-chairs, there would be further joint engagement with business groups and other stakeholders in Northern Ireland.

“The UK and the EU underlined their shared commitment to giving effect to those solutions agreed through the Joint Committee on 17 December 2020, without delay. The UK noted that it would provide a new operational plan with respect to supermarkets and their suppliers, alongside additional investment in digital solutions for traders in accordance with the Protocol,” they said.

Ms Foster, who was joined at the virtual joint committee meeting by deputy first minister Michelle O’Neill, said there was no breakthrough and that she was not surprised by the lack of progress.

“Even the minimal extensions to the grace period which Michael Gove had asked for were not granted and therefore it seems that the EU’s answer to all of this is more protocol. Of course, being tone deaf to what is actually happening in terms of trade and in terms of identity here in Northern Ireland,” she said.

Before the protocol came into force on January 1st, the EU agreed to a number of grace periods that meant checks on goods moving from Great Britain to Northern Ireland have not been fully implemented. The first of those, covering food and parcels, is due to expire at the end of next month´.

Earlier on Wednesday, one of Britain’s leading trade experts told MPs at Westminster that there was reason to be concerned about the sustainability of the protocol. Sam Lowe, senior research fellow at the Centre for European Reform, said the protocol could only endure if it enjoyed broad consent.

“It is in the EU’s interest to be as accommodating as possible so as to ensure that it endures and to ensure that it doesn’t have to keep returning to this question constantly, over and over again,” he told the Northern Ireland Affairs Committee.

“I do think the UK should further integrate into the EU’s SPS regime so as to reduce some of the most burdensome of checks. But then I also think that the “at risk” profile could be extended to cover other sorts of issues, for example around sausage meat and non-frozen meat entering Northern Ireland, and pets. I just think we already have solutions for certain specific issues that could be broadened.”

Later Mrs Foster said Wednesday’s meeting between the UK and EU over the Northern Ireland protocol was “hugely disappointing”.

The DUP leader Arlene Foster said she had not had high expectations “given the attitude of the European Commission to everything that we have said thus far”.

She accused the commission of not respecting the views of unionists, who she noted were the majority in the North. “What they have decided to do instead is if there are problems then what is needed to deal with those problems is actually not less protocol, but more protocol, and I think that is entirely tone deaf,” she told the BBC.

In a statement on Wednesday night, Ms Foster said it was now time for the British government to “act unilaterally” and argued that disruption to trade “should not be tolerated” within the UK.

“With a stubborn and inflexible response from Brussels it is now a matter for the government to step up and protect the United Kingdom internal market,” she said.

Ms O’Neill, said the meeting had been a “positive and constructive engagement.” Ms O’Neill said it was “very timely that we had the discussions that we had today, not least because it gave both sides, the EU side and also the British government the opportunity to, as they did, to restate their commitment to implement the protocol.”

Describing the meeting as “very pragmatic”, she said it was “very clear from the discussions that there was a recognition, particularly given the recent engagement with the local business and civic society, that there are issues that need to be resolved, but both sides committed to try and define practical solutions and that’s where everyone needs to be focused right now.”

She said the EU had offered to meet again in Joint Committee format before the end of March, and there would be further discussion at official level around certain border checks.

Earlier, Aodhán Connolly of Retail NI told a Stormont committee that businesses in the North needed “certainty” around the grace periods.

“We need the certainty of a long-term workable solution, designed with businesses, not done to businesses,” he said.

Appearing before the same committee, Seamus Leheny of representative body Logistics UK said some hauliers based in Northern Ireland had seen their revenue fall between 25 and 30 per cent in January due to the trade imbalance coming from Great Britain which left companies having to ship back empty trailers.

“A significant amount of those lorries going over laden are struggling to find loads to come back to Northern Ireland,” he said, adding that “we have got to get these trailers back here to make sure that the products still leave Northern Ireland.”

He said he has asked the UK government for financial assistance for hauliers shipping back empty trailers, but has not yet received a response.