Analysis: Feeling in Europe that Ireland needs to be reminded solidarity works both ways 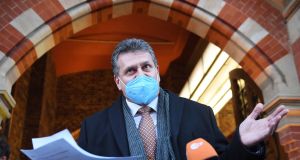 European Commission vice president Maros Sefcovic speaking to the media at London St Pancras station after arriving in the UK ahead of talks on the Northern Ireland protocol on February 11th. Photograph: Stefan Rousseau/PA Wire

European Union allies are concerned that Ireland is serving the interests of Britain by dwelling on the Article 16 debacle and now appearing to take London’s side by arguing for “flexibility” on the Northern Ireland protocol.

A quick recap for those who need it; on January 29th an emergency regulation containing a reference to Article 16 was provisionally approved by the European Commission and released to the press. It was withdrawn and an updated version adopted within hours, following howls of protest from Dublin.

Article 16 allows for the temporary suspension of parts of Northern Ireland’s special post-Brexit arrangements designed to avoid a hard border on the island, if they are inadvertently causing serious problems.

The Commission’s move was a boon to unionists who had been calling for its use as a way to end Irish Sea checks, and it undermined the EU’s best allies: those who had been arguing for the implementation of the protocol.

This week, members of the Oireachtas Committee on European Union Affairs grilled commission vice president Maros Sefcovic for details on how exactly the error happened on what he called “the fatal Friday”. They wanted to know who, how and why. He wouldn’t tell them.

Mr Sefcovic explained the commission was working under extreme pressure, and had reversed course as soon as the error was flagged. In future, anything touching on Northern Ireland would pass through a “clearing house”.

But he wasn’t going to start pointing the finger at specific officials. President Ursula von der Leyen has said she ultimately takes responsibility for the mistake. It’s time to move on.

He asked the TDs and Senators to remember how the EU as a whole had defended Irish interests in the negotiations.

“We have always been very loyal as the EU with Ireland,” he said. “I hope I’m not exaggerating when I say that 70 or 80 per cent of the time was devoted just to finding a solution in the form of the Northern Irish protocol.”

In Brussels and in EU capitals there is a feeling that Ireland needs to be reminded that solidarity works both ways and that dwelling on the affair risks undermining a common cause.

In the EU’s view Britain has shamelessly exploited the blunder to attempt to reopen negotiations and once again try to seek cakeist exceptions to its treasured single market.

The rhetoric of the Irish Government – with Taoiseach Micheál Martin telling the BBC that EU allies “need to cool it” and foreign minister Simon Coveney calling for “pragmatism and flexibility” – has raised concerns that Dublin is taking London’s side.

We stood by you to preserve your open border, continental allies feel; now stand by us to protect the single market.

“There is a growing concern that Dublin is tempted to follow a policy of equidistance towards the EU and the UK on Northern Ireland,” as one EU diplomat told the Financial Times.

“The EU has steadfastly supported Ireland throughout the Brexit negotiations. It would be a rather risky strategy if the Irish Government were to be seen as playing with European goodwill and solidarity.”