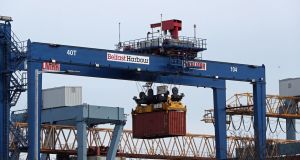 Checks on agri-food shipments arriving into Northern Ireland from Great Britain have been in place at the North’s ports since the end of the Brexit transition period on January 1st. Photograph: Niall Carson/PA Wire

The North’s Minister for Agriculture has ordered his officials to halt the construction of permanent inspection facilities for post-Brexit checks on agri-food goods arriving from Great Britain.

The DUP MLA Gordon Lyons told PA news agency he had also ordered a halt of further recruitment of inspection staff for the port facilities and ordered an end to charges levied at the ports on traders bringing goods from GB into Northern Ireland.

The SDLP on Friday evening called for an emergency meeting of the North’s Executive to address the “unilateral action” taken by the Minister.

“The DUP cannot pick and choose which duties and obligations of Executive leadership it wants to adhere to,” the party leader, Colum Eastwood said.

“This decision is controversial, cross cutting & cannot be put into effect without Executive agreement,” said the Minister for Infrastructure, Nichola Mallon.

The North’s Deputy First Minister, Michelle O’Neill, described the the Minister’s move as a stunt.

“The Protocol is a consequence of Brexit. The DUP championed Brexit and must own the consequences. Business and society need certainty, not stunts.”

Ms O’Neill said the decision was a matter for the whole Executive, and it was “clear that Gordon Lyons acting unilaterally cannot stop work continuing at the ports.

“Executive Ministers have a legal duty and a responsibility to ensure the implementation of the legally binding Withdrawal Agreement and Protocol,” she said.

Checks on agri-food shipments arriving into Northern Ireland from Great Britain have been in place at the North’s ports since the end of the Brexit transition period on January 1st.

They are required under the terms of the Northern Ireland protocol, part of the Brexit withdrawal agreement agreed between the UK and the EU which avoided a hard border on the island of Ireland by placing a customs and regulatory border in the Irish Sea.

Unionists are opposed to this because it places a border between Northern Ireland and the rest of the UK. They have called for the protocol to be scrapped and are challenging it in a judicial review.

Temporary Border Control Posts (BCPs) were constructed at ports before the end of the Brexit transition period. It is not clear if construction work was currently taking place on permanent facilities, or whether the Minister has the legal power to prevent it or other measures being implemented.

Last year the previous Minister for Agriculture, the DUP’s Edwin Poots, was forced to back down and permit the construction of the temporary posts after legal advice which said he did not have the legal remit to prevent the work taking place.

Mr Lyons told PA on Friday evening: “I’ve just let Executive colleagues know that today I instructed my Department to halt work on a range of issues relating to work at the ports.

Mr Lyons said the move was in response to the “practical difficulties” caused by the Northern Ireland Protocol and cited uncertainty over the movement of goods when grace periods currently limiting protocol bureaucracy end at the start of April.

“We don’t know what the movement of retail goods from Great Britain into Northern Ireland is going to look like, we don’t have the support in place through the digital assistance scheme yet either, and all of the SPS (sanitary and phytosanitary) issues around the end of the grace period are just so uncertain and it’s a real nightmare for us and it’s going to be causing us an awful lot of problems.”