Queen’s speech ‘likely to be delayed’ over DUP talks

Monday date to be pushed back, say sources, as start of Brexit talks may also face delay 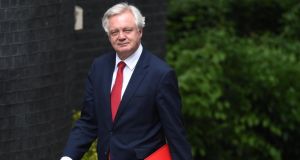 Brexit secretary David Davis: “They [Brexit talks] will start next week. The precise date will be given when we have it.” Photograph: Facundo Arrizabalaga/EPA

The Queen’s speech is unlikely to go ahead as planned next Monday, No 10 Downing Street has suggested, to allow the Conservatives to reach a formal agreement with the Democratic Unionist Party.

The prime minister’s official spokesman declined to confirm that the Queen’s speech – a statement by the monarch at the opening of a new session of parliament that lays out the government’s proposed legislative programme – would be held on June 19th as previously announced. The leader of the Commons, Andrea Leadsom, would soon release a statement on the date, the spokesman said.

A government source said the Queen’s speech took a week to be prepared, hinting it was likely it would be delayed by a few days. For the speech to be given as scheduled, the contents would need to be decided by Tuesday morning.

Also known as the gracious speech, it was historically written on vellum with ink that takes three days to dry. Although it is now written on thick goatskin parchment paper, this also needs several days to dry, meaning a speech cannot be amended at the last minute.

“The lead time is a very long one,” a government source said on Monday. “There is still a political cabinet to come, talks with the DUP, who need to be happy with the contents to ensure they will vote for it, and a full cabinet tomorrow. There is currently no fixed date.”

The reported delay will raise speculation that the prime minister is not yet certain she can get the legislation passed via a deal with the DUP in Northern Ireland.

Prime minister Theresa May is due to hold talks with the DUP leader, Arlene Foster, on Tuesday. “We are working with the DUP on a deal to ensure the safe passage of the Queen’s speech,” the prime minister’s spokesman said.

Asked again if the state opening of parliament would go ahead on Monday, the spokesman said: “You can expect the leader of the Commons to issue an update in due course in terms of the state opening. It’s not my job to say any more than I have.”

Any delay in the Queen’s speech would be difficult to accommodate, given the monarch is scheduled to attend Royal Ascot from next Tuesday until the end of next week. There has already been one major change to the royal diary because of the Queen’s speech: the Order of the Garter service was cancelled to accommodate the June 19th date at short notice.

“We are very firmly proceeding on the basis as we have been on the timeline for the Queen’s speech, on getting it finalised, on making it happen and getting on with the job of running the government.”

Downing Street also hinted there may be some flexibility in the start date for Brexit negotiations, which were also due to start next Monday. During the election campaign, the prime minister and the Brexit secretary, David Davis, repeatedly said talks would start “just 11 days after the election”.

However, Mr Davis told Sky News it was possible the first round of negotiations would not begin next Monday, because of the timing of the Queen’s speech.

“It’s in the week of next week, basically, the first discussions,” Mr Davis said, saying his department’s chief civil servant was in Brussels to sort out the timetable. “It may not be on the Monday, because we’ve also got the Queen’s speech, and I will have to speak in that and so on.”

The spokesman also indicated that Ms May intended to remain in office for the whole five-year parliamentary term, telling reporters: “I am not aware of any change in the position she set out in the election campaign.”

In an interview on Sunday night, however, Ms May was more ambiguous. “I said during the election campaign that if re-elected I would intend to serve a full term,” she said. “But what I’m doing now is actually getting on with the immediate job.

“The Brexit negotiations start in just a week, we need to get those right and make a success of it. But there are other issues that we need to address in our country. We’ve been listening to voters, and that’s what we will be doing.”

The prime minister is chairing a political cabinet on Monday , which the Scottish Conservative leader, Ruth Davidson, is attending. Later Ms May will meet Tory backbench MPs at a meeting of the 1922 Committee in parliament, where she is expected to be questioned about the party’s manifesto and campaign strategy.

On Tuesday, Ms May will travel to Paris for bilateral talks with the French president, Emmanuel Macron, before attending the England v France football match.