Havana: a city of colour and surprises 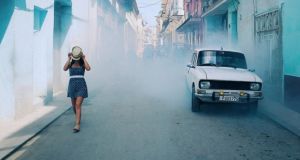 Cuba is full of surprises. On my first morning in a Havana casa particular (room in a private home), where all the hangers in my wardrobe were homemade, the young woman who brought breakfast invited me to accompany her into work.

Her name was Yvette, and as far as I could understand her job was playing oboe in some kind of band. She flagged down a pre-1959, fixed route taxi collectivo and 50 cents brought us to the centre of Vedado, the newest part of Havana.

We hopped out beside the Cuba Libre hotel, opened as a Hilton in 1959 then commandeered a few months later by Fidel as his command centre during the revolution. Around the corner was Yvette’s job, and my next two hours were spent in a crammed rehearsal room thrilling to the glorious noise of the 60-piece Cuban State Television Orchestra, with the highlight of their extensive repertoire being a swinging salsa version of the old Strauss classic El Danubio Azul.

Afterwards I made my way along 17th Street, admiring the succession of majestic, crumbling Deco houses, each more beautiful than the last. I couldn’t help but wonder how long it will be before most of them are snapped up by pimply tech millionaires from Palo Alto now that Cuba has been opened up for tourism from the US.

There certainly were a large number of tourists from el Norte around, and when I went to hear some world-class jazz in legendary club La Zorra y el Cuervo (The Fox and the Crow) it was hard to ignore the bunch of well-oiled retirees from the Midwest clapping along out of time. They did settle down after a while, as I imagine Cuba will once it gets over the shock of a sudden influx of Americans and their money.

The signs are good – there is a great sense of civic pride in Havana, and the Office of the City Historian, a huge state department of architects and planners tasked with renovating the many near-derelict buildings, makes sure that each part of the city remains properly mixed-use rather than turning it into some kind of Cuban theme park.

Laps of the square

This means that the local equivalent of Grafton Street has a maternity hospital (on publicly-owned land, naturally) and the Old Town’s Plaza Vieja hosts a primary school, where the pupil’s gym class has them running in between the tourists as they do laps of the square.

I did see another side to the story when I visited Harris Brothers, reputedly the best supermarket in the city. They had limited stock on offer; not much more than bottled water, rum, shampoo and jars of mayonnaise on otherwise empty shelves. Directly opposite, beside an abandoned van with no wheels, workmen were putting the finishing touches on a Mont Blanc fountain pen shop.

The plan was to spend a few days in Havana then strike out for the country, but I quickly discovered that despite the relaxed pace of life, leaving things to the last minute doesn’t really work in Cuba – there were no bus tickets to be had, and I didn’t particularly feel like spending six hours in the back of a truck.

Accommodation was the same – figuring that all the casas in the guidebook would be well booked out I tried Airbnb, only to discover it doesn’t take bookings from inside Cuba. Thankfully, the landlady of one of the booked-out casas was happy to figure out what I was trying to say in broken Spanish and found me an alternative.

Havana is made up of three distinct cities, more than interesting enough for a 10- day trip. I started in well-to-do Vedado to the west, before moving to the Old Town in the east, all the while exploring Centro in the middle.

Centro is the barrio, the roughest part of Havana – a dimly lit, forbidding looking place with lean youths on bikes flitting through the shadows and wheezing Russian Ladas carefully negotiating gaping crevasses in the street. This was another surprise – in any other country no tourist would dream of venturing into this part of town, especially after dark. But I don’t think I’ve ever felt so safe, even with a camera.

Cubans are so friendly and polite that even the hustlers are easy to deal with – I was regularly asked if I wanted a chica, cigarro, internet card or all three, and when I demurred I’d get a big smile and best wishes for the rest of my evening.

As time passed I was glad that my very basic level of Spanish started to improve – one night while photographing a gang of youths in Centro, one of them said “Tu no entiendes Español, coño?” (You don’t understand Spanish, coño?) and I was able to give him a big smile and reply in Spanish “I understand ‘coño’.” His friends thought it was hilarious. If you don’t understand the word “coño”, a quick viewing of Scarface or any episode of Narcos will put you right.

Surprises around every corner makes the city a photographer’s paradise - it’s not just the vivid colours and amazing light but all of the events, the richness of life being lived in full view. Trying to capture everything from a girl emerging from a cloud of white smoke to a policewoman in mid-argument, my camera rarely left my hand.

There’s so much to see on the streets, so many pictures to take, that the whole time I was there I only made it to two museums – the first was the Museum of Chocolate, which happily turned out to be just a great chocolate shop with a few glass cases of implements.

The second was the Museo de Revolucion, which I found unexpectedly moving. From the bullet holes in the marble staircase left when the rebels stormed the building to the armour-plated tractors in the courtyard, the museum told the story of a small bunch of young men (and Raúl Castro, looking about 15 in the pictures from the time) who set out on a near-certain fight to the death and to their surprise ended up liberating the country. Pride of place goes to the yacht that carried them from Mexico, the Granma, now housed inside a giant glass box, making it look like some kind of revolutionary Damian Hirst installation.

Cuba is pricier than I expected: while accommodation is cheap, getting around does add up (after a few days I was politely informed by an American that the taxi collectivos are reserved for Cuban citizens). I tried one of the bright yellow, egg-shaped tuk-tuks, but one trip was enough to convince me that walking and official taxis were a far better option. As it zipped between the hulking 1950s cars at terrifying speed I took little comfort from the fact that at least the helmeted driver might survive the spectacular crash that was surely around the next corner – there wasn’t much hope for his bare-headed passenger.

I had also been warned to lower my expectations of the food, and with good reason; if you want to eat anything much better than a Cuban pressed sandwich (ham, Swiss cheese, roast pork, pickles and salami) you’ll pay a fair bit for it – such as the small plate of lobster risotto I treated myself to at the rooftop bar of legendary restaurant La Guarida, a beacon of fine dining in the middle of Centro.

Splurging like this meant I needed to use ATMs more often than I’d expected, and I quickly discovered they had their own, particularly Cuban temperament. “La máquina está loca,” grumbled an old woman in the queue beside me, encouraging me to keep trying – it worked on the fifth attempt.

Another price to be paid in Cuba is an inevitable bout of food poisoning. Whatever it was that didn’t agree with me put me in bed for an uninterrupted 18-hour fever dream, which actually wasn’t all that unpleasant. Coming to the following morning, I looked up and saw I hadn’t hallucinated it – there really was an ace of hearts stuck to the ceiling above the bed. The landlady explained that this was because I was staying in the habitación matrimonial or bridal suite.

Aside from the heat, the light, and the colours, the best part of the entire trip was experiencing the openness and incredible spirit of the Cuban people. I hope nothing will take it away, and I also hope I can get back there soon to experience even more of it.