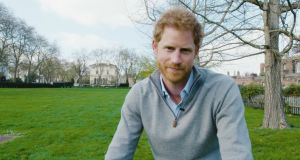 Prince Harry has spoken in-depth for the first time about the impact his mother’s death had on him when he was 12. File photograph: Kensington Palace/PA Wire

Prince Harry has spoken in-depth for the first time about the impact his mother’s death had on him when he was 12.

In an interview with the Telegraph published on Sunday night, Prince Harry (32) said he was “very close to a complete breakdown on numerous occasions” over the death of Princess Diana, who was killed 20 years ago in a car crash in Paris, France.

He admitted that in his 20s he had “two years . . . of total chaos” before getting the help he needed to deal with her death.

The prince said: “I can safely say that losing my mum at the age of 12 and therefore shutting down all of my emotions for the last 20 years has had a quite serious effect on not only my personal life, but my work as well.

“My way of dealing with it was sticking my head in the sand, refusing ever to think about my mum because why would that help?

“I thought, ‘It’s only going to make you sad, it’s not going to bring her back’. So from an emotional side, I was like, ‘Right, don’t ever let your emotions be part of anything’.”

The interview was with Telegraph journalist Bryony Gordon for the first episode of her podcast Mad World, in which she will interview high-profile guests about their mental health experiences.

“And then I started to have a few conversations and actually, all of a sudden, all of this grief that I have never processed started to come to the forefront and I was like, ‘There is actually a lot of stuff here that I need to deal with.’”

Prince Harry said the purpose of him opening up about his mental health issues was to encourage others to do likewise.

“What we are trying to do is normalise the conversation to the point where anyone can sit down and have a coffee and just go, ’You know what, I’ve had a really s**t day, can I just tell you about it?’ Because then you walk away and it’s done.”

The prince, along with his brother Prince William and sister-in-law the Duchess of Cambridge, has spearheaded Heads Together, a charity which promotes mental well-being.