Prince Andrew: why meeting US authorities could be a ‘catch-22’ 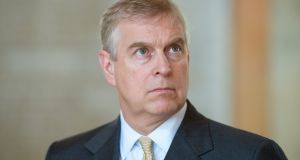 Prince Andrew has denied Epstein’s accuser Virginia Giuffre’s claim that she had a sexual encounter with the royal when she was 17. Photograph: Getty

As the fallout from Prince Andrew’s friendship with convicted sex offender Jeffrey Epstein continues, questions have surfaced about whether the royal might face legal trouble.

Prince Andrew’s disastrous Newsnight interview on the issue - where he emphatically denied Epstein’s accuser Virginia Giuffre’s claim that she had a sexual encounter with the royal at age 17 - has seen the prince exit public life in disgrace.

But in a statement announcing his current departure from public duties, the Duke of York said: “Of course, I am willing to help any appropriate law enforcement agency with their investigations, if required.”

This echoed his comment during the BBC interview, in which he said he was prepared to give testimony under oath “if push came to shove and the legal advice was to do so”.

Prince Andrew’s offer to potentially be interviewed could be important for US authorities’ continued investigation of Epstein - who killed himself in jail after his arrest for alleged sex trafficking of minors - as they are keen to talk to high-profile friends of the disgraced financier as they seek to track down more of his accomplices and associates.

But speaking with US authorities - even when innocent - inherently carries legal risk, longtime attorneys told the Guardian.

Prince Andrew is not charged with wrongdoing but with the BBC airing an interview with Giuffre on December 2nd, the controversy is only likely to ramp up.

Julie Rendelman, a former prosecutor who has long practiced criminal defence, said she would advise clients to be wary if subpoenaed by a grand jury - a body of US citizens which determines whether to bring an indictment - if there is any possibility that they are the subject of an investigation.

“Unless they’re being given immunity, then as an attorney who believes that a client potentially has risk of criminality or criminal liability, I would tell them to plead the fifth,” Ms Rendelman said, referring to the US constitutional protection against self-incrimination.

“There’s nothing to be gained by talking to a grand jury without immunity in those circumstances.”

A decision to meet with US authorities would depend on whether a client has “serious risk of facing imminent criminal charges”.

In that situation, a client could potentially benefit by quickly giving up possible co-conspirators.

But there are certain circumstances in which an attorney might advise a client to testify before a grand jury, she said.

“If you have someone that’s just a witness - a pure [and] simple witness to a crime that has absolutely no criminal liability whatsoever, as an attorney, you have to distinguish those individuals,” Ms Rendelman explained.

“With that said, there are gray areas: there’s the defendant, there’s the completely innocent individual, and there’s often someone in the middle.”

But one should be careful not to automatically think that there’s no criminal exposure when there might be, Ms Rendelman said.

A secretary at a business that has scammed millions of people, for example, might think they have nothing to worry about in testifying, and that authorities might just want to know what others were doing.

“There is a potential risk that what can be used is not just against them, but against her because she worked there,” Ms Rendelman said.

Other legal experts voiced similar views about the prospect of the prince voluntarily meeting with investigators.

“I see the downside to be larger than the upside for him,” said David Weinstein, a former federal prosecutor who now practices white-collar criminal defense at Hinshaw & Culbertson. “It’s the way the questions are asked, the way he answers the questions.”

Prince Andrew’s performance in the Newsnight interview - which has triggered a full-blown royal crisis - is unlikely to inspire much confidence in his ability to handle an interview by trained lawyers or FBI agents.

Giving a “bumbling” response or hesitating is risky and speaking with authorities “may allow them to confront him and then twist his answers”, Mr Weinstein said.

There are also practical issues.

If Prince Andrew were lawfully served with a subpoena - be it for a grand jury, or a trial or deposition - generally speaking, he will need to comply.

However, it is far more difficult to serve him outside the US.

“Due to the heightened measures of security that surround the royal family, it certainly is far more difficult to walk up to a member of the royal family and serve them a subpoena as you would a private citizen,” Weinstein said.

While there are rules about how to serve subpoenas on a foreign national on US soil, such as surprising them at points of entry, diplomatic immunity and his being a high-profile royal could further complicate the issue.

Rebecca Roiphe, a New York Law School professor and former assistant district attorney in Manhattan, said there could be legal risks in Prince Andrew cooperating depending on his potential involvement with Epstein’s activities.

“If he was peripherally involved in that, if he has information about others, I would say absolutely any attorney would take him in to cooperate,” Ms Roiphe said. “The problem is, if he faces serious exposure and he’s a target of that information, most attorneys would not have him explain everything he knows - it really depends.”

Mary Ellen O’Toole, who was formerly an FBI profiler deeply involved in finding the Unabomber killer, said that if Prince Andrew could provide information that would further the investigation and clear him at the same time, it “probably would be very helpful to him” to come forward.

Ms O’Toole said the utility in co-operating with authorities largely depends on how he would handle the situation and that the pitfalls of such an interview were real as being untruthful with authorities can flout laws against making false statements, leading to further legal problems stemming from the interviews themselves.

“I think it would be considered an adversarial situation - I don’t know how prepared he would be,” said Ms O’Toole, who now directs the forensic science department at George Mason University in Virginia. “Sometimes people come in and say things that get them jammed up.