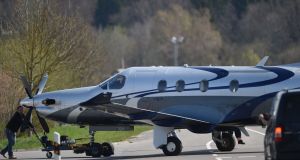 A file photograph of a Pilatus PC-12 single-engined plane. An aircraft of the same model crashed in Dakota, killing nine. Photograph: FELIX KAESTLE/DPA/AFP via Getty Images

Nine people were killed and three injured in an airplane crash in the US state of South Dakota.

The aircraft, a Pilatus PC-12, carrying 12 people on board, was bound for Idaho from South Dakota before it crashed around noon on Saturday, the Associated Press said, citing the National Transportation Safety Board (NTSB).

The aircraft flying in blizzard-like conditions crashed shortly after takeoff, with two children among the victims, authorities said.

The three survivors were transported to hospitals in Sioux Falls.

Investigators will be investigating the weather conditions, the pilot and the aircraft, said Peter Knudson, a spokesman for the NTSB. – Agencies