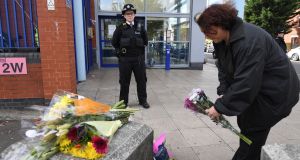 A woman places flowers outside Croydon Custody Centre where a police officer was shot by a man in London on September 25th. Photograph: Facundo Arrizabalga/EPA

A British police officer was shot dead in the early hours of Friday by a man who was being held at a custody centre in south London.

Police said the incident occurred at about 2:15 am while the man was being detained at the Croydon Custody Centre, where arrested suspects are processed. The unnamed officer was treated at the scene for injuries but died in hospital.

The 23-year-old suspect is thought to have then turned the gun on himself. He was taken to hospital with a gunshot wound and is in a critical condition. Officers did not open fire.

“A murder investigation is under way and officers are working at several crime scenes to secure evidence and to establish the facts of what happened,” said London police chief Cressida Dick, who described the incident as “truly shocking”.

“Early indications are that the suspect shot himself. This has not yet, of course, been established as a fact.”

The incident has been referred to the Independent Office for Police Conduct.

UK prime minister Boris Johnson said: “My deepest condolences go to the family, friends and colleagues of the police officer who was killed in Croydon last night. We owe a huge debt to those who risk their own lives to keep us safe.”

The killing of an officer is a rare event in Britain where the vast majority of police remain routinely unarmed. The BBC said only 16 other London police officers had been killed by a firearm since World War Two.

“This is a sad day for our country and another terrible reminder of how our police officers put themselves in danger each and every day to keep the rest of us safe,” said home secretary Priti Patel.

The last officers to be shot dead while on duty were unarmed police constables Fiona Bone (32) and Nicola Hughes (23) who were gunned down by a fugitive in 2012 after responding to a hoax call about a burglary in the northern English city of Manchester. – Reuters