A steelworker has corrected Donald Trump that his father "is still alive" after Trump suggested he was "looking down" on him during an event to sign a proclamation to impose tariffs on imported steel and aluminum into the US. Video: The White House 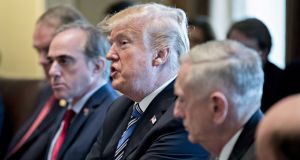 US president Donald Trump during a cabinet meeting at the White House on Thursday. Mr Trump opened the session promoting a “very big” meeting on steel and aluminium tariffs. Photograph: Michael Reynolds/Bloomberg

US president Donald Trump has confirmed plans to introduce punitive tariffs on steel and aluminium imports, but opened the door to excluding some countries from the measure.

Following a meeting with workers from the steel and aluminium industries on Thursday, Mr Trump signed two proclamations in the Roosevelt Room of the White House, announcing a 25 per cent tariff on steel imports and 10 per cent on aluminium. The tariffs will come into effect within 15 days.

But following intense lobbying by Republicans on Capitol Hill, Mexico and Canada have been excluded from the measure initially.

“This gives some time to figure out how the situation will unfold with respect to the Nafta negotiations,” a senior administration official said, referring to the ongoing renegotiation of the trade deal that governs the relationship between the United States, Canada and Mexico.

In addition, countries with a security relationship with the United States will be “welcome to discuss” alternative ways to resolve the issue, officials said.

“Should the president of the United States decide that there is a satisfactory alternative means to address the threat to national security this administration has the ability to flexibly modify the order in a way that will preserve our national security.”

Officials defended the tariffs, which have been invoked under a rarely used WTO clause citing national security concerns, as “modest, targeted and balanced”. They predict “no significant downstream price effects or job effects” for American consumers and workers.

But America’s allies have reacted with alarm to Washington’s threat to impose tariffs on metal imports, warning of retaliatory action on American exports. South Korea, China, Germany and Brazil are among the top exporters of steel to the US as well as Canada and Mexico.

The proposal has also been opposed by the Republican leadership in Congress. More than 100 Republicans wrote to Mr Trump on the eve of the announcement urging him to reconsider the move which jars with the traditional Republican stance on the sanctity of free trade .

The confirmation of the measure, which were trailed by Mr Trump last week in an impromptu press conference, has also been the catalyst for chief economic adviser Gary Cohn’s resignation this week. Mr Cohn, a proponent of free trade, had strongly advised against the new tariffs.

At a televised cabinet meeting on Thursday, Mr Trump thanked Mr Cohn for his work, and predicted that he may rejoin the White House. The departure of the former Goldman Sachs banker has dismayed markets which have reacted negatively to his resignation and to the imminent imposition of tariffs on metal imports.

While allies and economists criticised the move, the trade move has prompted several steel companies to announce plans to resume production and increase investment.

Chief executive of US Steel David Burritt confirmed that capacity would be increased at the company’s plant in Granite City, Illinois, and that he would be recalling 500 workers. “This feels like the beginning of a renaissance for us,” he said.