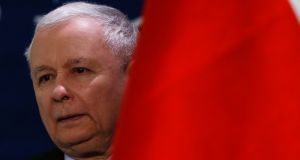 Jaroslaw Kaczynski, leader of the ruling Law and Justice Party. Poland’s once promising relationship with the EU is in crisis . Photograph: Kacper Pempel/Reuters

While others might bake a cake, Poland’s national conservative government is marking the European Union’s 60th birthday this weekend by filing criminal charges against one of its leading officials.

Tusk’s elevation to the top Brussels job in 2014, a decade after Poland joined the EU, was seen as a signal of just how far Poland had come in its post-Cold War journey.

But that journey took a different course when his PiS rivals took back the presidency and parliament in 2015. The new government began reforming the judiciary, civil service, public prosecutor and public media – reforms so drastic that leading human rights bodies fear for the rule of law in Poland.

European Commission vice-president Frans Timmermans shares these concerns and this week announced he would pass on to member states his investigation of Poland.

“If necessary we will use the instruments we have,” he said this week, as the European Parliament held a debate on moves to limit Poland’s voting rights, as well as curb EU funding.

Kaczynski has shrugged off these European investigations as a “joke”, confident that Hungary will veto any attempts to sanction Warsaw. Instead the PiS leader is focusing on domestic affairs, resetting Poland’s democratic clock to correct what he views as its flawed and crooked transition to democracy in 1989.

His supporters welcome his campaign as a chance to topple old elites and bring in people left behind in the last decades; critics see the campaign as a smokescreen for a PiS-dominated authoritarian state.

These domestic wranglings have overshadowed Poland’s relationship with Brussels of late, in particular Warsaw calls for the post-Brexit union to repatriate powers from Brussels back to European capitals.

Poland’s EU partners are wary of its intentions, to put it mildly, pointing to Warsaw’s regular bouts of anti-EU vitriol and what many view as its strictly transactional relationship with the bloc.

Germany, Ireland and others, already lukewarm on integrational regression, have argued instead for a multi-speed Europe, expediting integration on a project basis among willing member states.

Ahead of this weekend’s anniversary of the Treaty of Rome, Poland’s once promising relationship with the EU is in crisis. Some 80 per cent of Poles support EU membership but share conflicting views: a limited appetite for further integration and burden-sharing – in particular on migration – combined with a deep-seated, historical fear of being left behind.

Kaczynski plays these fears for domestic gain, blaming German EU dominance to explain why, for instance, why no one backed his attempts to block Tusk for a second European Council term.

Furious, Poland has now stepped up its campaign against Tusk over his handling as prime minister of a 2010 plane crash that killed 95 Polish dignitaries, including Kaczynski’s twin brother, then president Lech Kaczynski.

Although two reports have blamed pilot error and other factors for the tragedy, Kaczynski views the crash as a conspiracy. Leading PiS allies talk of a bomb plot – although the exhumations of crash victims they ordered to prove the case for conspiracy revealed no traces of explosives.

For lack of evidence, PiS appears to have quietly dropped plans to charge Tusk with murder, favouring instead charges of diplomatic treason claiming he colluded with Russia after the crash.

Ahead of the EU’s birthday party, Tusk has dismissed the Polish case against him as motivated by “emotions and obsessions”.