Varadkar and May meeting as EU leaders gather in Brussels

Taoiseach Leo Varadkar is in Brussels for a two-day summit of EU leaders that will focus primarily on tax and trade. Video: European Council 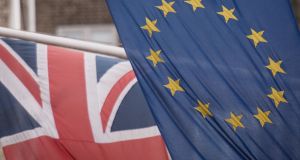 Taoiseach Leo Varadkar is meeting UK Prime Minister Theresa May to discuss progress made in Brexit negotiations ahead of a meeting with EU leaders on Thursday evening at the European Council summit in Brussels.

Mr Varadkar landed in Belgian capital for the start of the two-day summit of EU leaders that will focus primarily on tax and trade, and the state of negotiations around the UK’s exit from the EU.

The European Council will approve guidelines for negotiators on the future relationship between the EU and the UK at the summit.

Mr Varadkar’s views on EU-US relations will be of significant interest at the meeting of EU leaders in Brussels today as the last European head of state at the council to have met US President Donald Trump.

In his meeting with EU leaders at the summit today, Mr Varadkar will share the concerns raised by Mr Trump during their annual St Patrick’s Day meeting last week about the European Commission’s proposed digital tax - pushed by France - and its impact on US multinationals operating in Europe, many of which are large employers in Ireland.

The Taoiseach will share details of the US president’s tariffs on imported steel and aluminium as EU leaders assess whether the 28-member bloc will be exempted from the Trump administration’s tariffs when they come into force on Friday.

There is growing confidence in Brussels that the EU will be able to secure an exemption against the Trump administration’s tariffs, diminishing the risk of a transatlantic trade war. This follows two days of talks in Washington by European trade commissioner Cecilia Malmstrom.

Mr Varadkar is expected to mention the fact that he raised the prospect of a new trade deal between the EU and the US with Mr Tump and that the US president indicated that he was not ill-disposed to looking at the concept, despite his protectionist proposals and “America First” rhetoric around trade.

Ahead of his meeting with EU leaders, Mr Varadkar was meeting Dutch Prime Minister Mark Rutte this afternoon. Mr Rutte, while pro-EU with a liberal economic outlook, is opposed to the radical EU reform agenda proposed by French President Emmanuel Macron that includes the proposed EU digital tax, believing that power should rest as much as possible with national governments.

The Irish Government opposes the tax proposal, preferring that loopholes between national tax systems exploited by multinationals are closed through international measures proposed by the OECD rather than through a European tax.

EU leaders will also discuss the single market and remaining barriers to full entry, and external relations, including concerns about EU expansion to the Balkans and presenting a united position on Russia.