Sweden and coronavirus: how has the outlier of Europe fared? 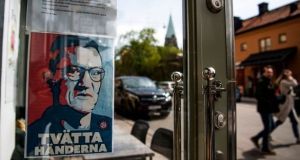 A sign with a portrait of state epidemiologist Anders Tegnell is hanged at an entrance to a restaurant to instruct people to wash their hands in Sodermalm, Stockholm. Photograph Jonathan Nackstrand/AFP

Sweden’s approach to the coronavirus pandemic has been the subject of international fascination and some misrepresentation since its state epidemiologist Anders Tegnell promoted the controversial idea of “herd immunity”, saying that if society was kept open the population would build resistance to the virus.

Six months on, how has Sweden fared?

Swedish policy differs to that of many countries around the world in being largely based on voluntary guidelines. Authorities asked citizens to keep their distance, use public transport less and work from home where possible.

This strategy relied on high levels of trust in authority and compliance, drawing on Sweden’s tradition of collective action to defend the country from threats developed during the second World War.

Prime minister Stefan Lofven described it as a “common sense” response and said people needed to be “adults”.

Although the advice was voluntary, adherence was high. This meant that contrary to international perceptions, life in Sweden was not so radically different to countries that did introduce strict rules. Journeys outside the home and social interactions plummeted. Vulnerable people and the over-70s were told to isolate, and gatherings of over 50 people were banned.

However, school continued for under-16s with mandatory attendance, and bars, restaurants and gyms remained open, while being advised to keep customers 1m apart.

Earlier this year, Sweden briefly became the country with the most deaths per capita in Europe, before it was overtaken by Belgium, Spain, Italy and the United Kingdom. Its toll of 5,876 deaths in a country of 10 million is five times higher as a percentage of population than Denmark and 10 times that of Norway and Finland. Sweden was “red-listed” for travel by several European countries due to its higher infection rate.

The Swedish government never argued that it was pursuing a different path for economic reasons. The impact of the pandemic is expected to cause a contraction of the economy comparable to other Scandinavian countries, but not as bad as places like Spain.

Authorities have admitted that a core part of their strategy failed: protecting the elderly. Although the vulnerable were in theory supposed to be protected, nearly half of deaths took place in care homes.

But since June, the number of infections detected daily in Sweden has fallen and stabilised, and the country has yet to see the sudden spikes experienced by other European countries this September.

National strategies are difficult to compare because existing conditions vary steeply between countries. Factors as diverse as housing design, cultural differences in how people socialise, and working conditions are all likely to affect the spread of the virus. More than half of households in Sweden are made up of one person living alone, the highest level in Europe and over twice that of Ireland.

The impact of the virus is also deeply uneven within Sweden. Immigrant communities were disproportionately affected, and the impact was geographically diverse, with some parts of Stockholm heavily hit while other Swedish cities largely dodged the virus.

Dr Tegnell has said that an increase in autumn “is more or less inevitable”. International observers are likely to continue to watch carefully how Sweden fares, as it has become an outlier in another way: unlike much of Europe, it has declined to introduce mandatory face masks.