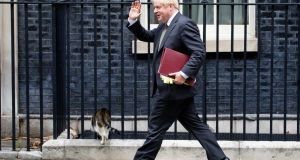 Boris Johnson: “We are looking at a massive package now of investment in jobs and growth in the short, medium and long term.” Photograph: Will Oliver/EPA

Boris Johnson has promised a “massive package” of support for the British economy after businesses warned that his six-month coronavirus clampdown risks mass unemployment.

The British prime minister has ruled out extending the current furlough scheme beyond the end of October but he acknowledged that many companies faced very difficult circumstances.

“That’s why we are looking at a massive package now of investment in jobs and growth in the short, medium and long term. There will be creative and imaginative measures from the chancellor to help people through this crisis. We will do everything we can to support business and those in jobs and the self-employed.”

The Confederation of British Industry (CBI) and the Trades Union Congress (TUC) have both called for the furlough scheme to be replaced by something like Germany’s Kurzarbeit and France’s chômage partiel. This would see the government topping up the pay of workers employed for at least 50 per cent of their normal working hours.

Mr Johnson this week ordered all pubs and restaurants to close at 10pm and told office workers to work from home if possible, adding that the restrictions are likely to remain in place for six months and could be tightened further. The move has drawn criticism from some Conservative backbenchers, who want MPs to have a say before any further measures are introduced.

But Prof Peter Openshaw, an immunologist on the government’s scientific advisory panel, said a ban on households meeting in each other’s homes must come soon.

“I would think if we wait two or three weeks it will be too late. It ought to be introduced sooner rather than later,” he told the BBC.

Scotland has already introduced a ban on such household mixing but Downing Street said the six-person limit on gatherings in England was adequate.

“We introduced a week ago new restrictions on mixing between households, we brought in the rule of six which we think provides clarity for people as to how they can help to break the chain of transmission between households. Separately that’s a policy we’ve adopted in the local lockdown areas. There are very significant parts of England where two households aren’t able to meet indoors and it’s a policy we may well decide we need to apply in other localised parts of England,” the prime minister’s official spokesman said.

In the House of Commons, Mr Johnson defended his assertion that testing and tracing did not affect the spread of coronavirus.

“It is an obvious fact of biology and epidemiology that alas this disease is transmitted by human contact or aerosol contact. But it is one of the great advantages of NHS Test and Trace, which we did not have working earlier in the pandemic, that we now have the ability to see in granular detail where the epidemic is breaking out, exactly which groups are being infected,” he said.