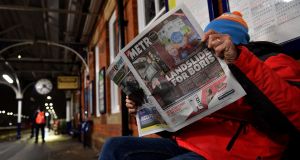 The results of the UK general election make it clear that Tory MPs will comprise the many and Labour will be the few in the next parliament. Here is how the British newspapers cover it this morning.

“Labour in meltdown as Johnson seizes majority” – that’s the Guardian after a calamitous election result for Jeremy Corbyn. The paper gets into its final edition the Labour leader’s speech saying he will not lead the party into the next election – but intends to cling to the helm to oversee a “period of reflection”.

“Johnson unleashed” says the i, adding “Brexit in 49 days after Midlands and North tire of delay”.

The Daily Mirror calls the outcome a “Nightmare before Xmas” as it laments the “worst Labour result since 1935”.

Here’s a bit of unseen newspaper history - the unused ⁦@DailyMirror⁩ front page we prepared just in case the 10pm exit poll showed an unlikely Labour victory. In the bin. pic.twitter.com/oPA8w6BwA4

“The British lion roars for Boris and Brexit” – the late edition of the Express, which in its earlier editions hailed “Victory for Boris AND for Brexit”.

“The Dog’s Bollox” says the Sun in early editions, with the X done as the cross on a ballot paper – its final version has “Carrie on Boris” picturing the returned prime minister and his girlfriend.

The Times says that “Election poll points to Johnson landslide”.

In its late edition the Telegraph goes with “Johnson’s historic victory”, dropping the “landslide” headline it ran in earlier versions.

The Daily Mail in its final edition enthuses that Conservative voters should “Rejoice! Boris surges to landslide win”.

“Exit polls point to vindication for Johnson with huge Tory majority” says the Financial Times, which also reports that the SNP is on course to take 55 of 59 Scottish seats.

Finally, the Metro’s 3am edition: “Landslide for Boris”.–Guardian