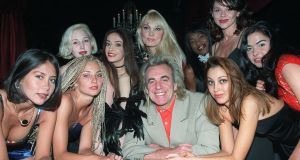 Peter Stringfellow with some of the women he has been auditioning for his new tableside dancing club, Cabaret of Angels, in 1996. Photograph: PA Wire 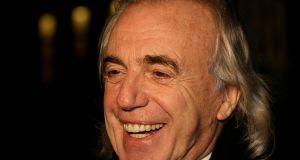 Nightclub owner Peter Stringfellow celebrating in 2006 after he was granted licence for his proposed club to be based in central Dublin. Photograph: PA Wire

Nightclub owner Peter Stringfellow has died of cancer at the age of 77.

The businessman, who had wanted to keep his illness private, died in the early hours of Thursday morning after spending time in hospital, a spokesman said.

His publicist, Matt Glass, told the Press Association: “It’s very sad news. He passed away in the early hours of this morning. It was kept very private, he didn’t want to tell. He wanted to keep it a secret.”

Stringfellow started in the nighttime trade in the early 1960s and recalled booking acts including The Beatles, The Kinks and Jimi Hendrix to play at his clubs.

In 1980 he opened Stringfellows in Covent Garden in London’s West End and went on to create venues in Paris, New York, Miami, and Beverly Hills.

With its topless girls and exuberant after-hours entertainment, the Stringfellow brand became a byword for debauchery and sexual kicks that echoed of the empire created by late Playboy magnate Hugh Hefner.

He opened a club on Parnell Street in Dublin but it closed in 2006 after less than six months in operation. The Irish company that held the licence and operated the club, Sabley Taverns Ltd, cited continuing protests by local residents outside the club along with financial losses due to “legal proceedings in relation to licensing” as reasons for the closure.

He said his clubs had hosted A-listers including Prince, Marvin Gaye, Rod Stewart and Tom Jones.

And it was not just pop stars who experienced Stringfellow’s hospitality - Professor Stephen Hawking once joined him for dinner at one of the venues.

Stringfellow was born on October 17 1940 in Sheffield, the eldest of four brothers and the son of a steelworker.

After leaving college at the age of 15, he took a string of jobs, including at a cinema in Sheffield, before enrolling as an apprentice in the navy. His sailing career lasted two years, after which he returned to his home city.

He served a brief prison sentence in 1962 for selling stolen carpets, a sharp lesson which he said put him on the straight and narrow.

In 1962, Stringfellow began renting St Aidan’s Church hall in Sheffield every Friday night, known as the Black Cat Club, and booked several bands to play there.

On April 2nd the following year, The Beatles played - and it proved the turning point in Stringfellow’s career. He went on to arrange concerts at another venue in the city, the Blue Moon Club, where he attracted the likes of The Kinks, before he opened King Mojo Club in 1964.

Over the next three years, bands and singers such as The Who, Pink Floyd, Rod Stewart and Elton John played at the club, while some of the first Motown acts to perform in the UK also headed there.

Venues in Leeds and Manchester followed, before Stringfellow moved to London in 1980 and opened Stringfellows Covent Garden.

The Upper St Martin’s Lane venue was an immediate hit, and became frequented by international film and rock stars and all manner of celebrities, as did his subsequent clubs in New York, Miami and Los Angeles.

In the 1990s, Stringfellow introduced table dancing into his New York and Covent Garden clubs, before opening an adult entertainment club - Angels - in Soho in 2006.

In a 2012 article for the Guardian he attributed his entrepreneurial spirit to his “feisty” mother.

He said sex was never a topic of conversation in the house, while his father declined an invitation to visit one of his establishments in his later years.

Unlike his parents - who stayed married their whole lives - Stringfellow had an eventful love life which saw him wed three times.

In an interview with the Guardian in 2012, he said: “The first time, I got married to the first girl I met when I left school, as that’s what you did in those days.

“We had a daughter and I walked out when she was about two-and-a-half years old.

“The second marriage lasted 24 years, but my business came first and along with that came the opportunity to have other women, and I took full advantage.”

His five-year marriage to Norma Williams, whom he married in 1960, produced a daughter named Karen.

In 2009, the nightclub pioneer married 27-year-old former Royal Ballet dancer Bella Wright and the pair’s two children Rosabella and Angelo were born when he was in his 70s.

Last year, he chose his London club as the venue for his children’s naming ceremony.

In an interview with Hello! magazine, he said: “We were offered Westminster Cathedral, but I said no.

“It would have felt hypocritical. None of that religious stuff sits well with me. “And at the end of the day, Stringfellows is my heart and soul. This is where it all happens — it’s even where I first met Bella.”

In 2015, the nightclub mogul revealed he had secretly fought lung cancer in 2008, telling only a handful of friends and family to avoid unwanted attention.

Stringfellow was also grandfather to Taylor, Jaime, Thomas and Isabelle.