Ireland will be main US-Europe bridge after Brexit, Ambassador claims 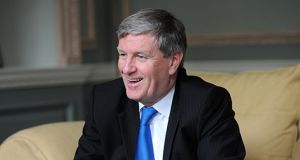 Irish Ambassador to the US Daniel Mulhall. Photograph: Department of Foreign Affairs

Brexit is likely to lead to a strengthening of the US-Irish bond and the emergence of Ireland as the main bridge between the US and Europe, the Irish Ambassador to the US has predicted.

The UK’s departure from the EU would leave the State as its only predominantly English-speaking member, and a natural destination for US investors looking for a European base, especially given Ireland’s longstanding “special relationship” with Washington, Daniel Mulhall has said.

Mulhall, a former Irish ambassador to the UK, said he found that anxiety over Brexit had accompanied him from London to Washington.

“Since I arrived here last August, I’ve found that I’ve been asked about Brexit more often than anything else that I’ve had to deal with,” Mr Mulhall said, adding that the greatest concerns he encountered were about the nature of the post-Brexit Border between the Republic and Northern Ireland and the impact of a hardened Border on the Belfast Agreement.

The ambassador stressed that Ireland had no desire to take things away from Britain, but would have little choice but to counterbalance the negative impact of Brexit by taking advantage of the upsides to it.

He listed the two main benefits brought to US-Irish relations by Brexit as the Republic’s greater appeal as a destination for investment and an enhanced diplomatic role as Washington’s closest EU partner.

There are already 700 US firms with investments in Ireland, according to Mr Mulhall, who added: “In the future I would expect that US companies who feel a need to have a base within the European Union would see Ireland as a more attractive option because perhaps Britain may be less attractive on account of Brexit.

“There’s also potential for greater political dialogue between our two countries [the Republic and the US], and especially in a context where Ireland will be the only English-speaking country and probably will be the country in the European Union after Brexit that has the closest and most intensive relationship with [the] United States, ” Mr Mulhall said. “Certainly in terms of economic and cultural norms.”

The State plans to open new diplomatic missions in the US and bolster existing missions there as part of a plan announced by Taoiseach Leo Varadkar to double the country’s global footprint by 2025.

“We see ourselves as a global country, not so much an island behind an island at the edge of a continent, but rather an island at the centre of the world,” Mr Varadkar told a Washington audience during a US visit in March.

Mr Mulhall said the coming diplomatic expansion would “ensure that we take full advantage of the opportunities that exist in the United States”.

More than 35 million Americans identify as having Irish heritage. The investments of 700 US companies in Ireland, employing 150,000 people, are balanced by those of roughly 500 Irish companies in the US, employing 100,000 Americans. Trade in goods and services is more or less equivalent in both directions.

It has already slapped steel and aluminium tariffs on the EU, which has responded with retaliatory tariffs on a list of US-made goods including Levi’s jeans, Harley-Davidson motorcycles and bourbon whiskey.

The State is most concerned about collateral damage caused by US sanctions against the Russian oligarch Oleg Deripaska, who was on the board of the Rusal aluminium company. Rusal owns a processing plant employing 450 people in Limerick.

Mr Deripaska resigned from Rusal’s board in May but it is not yet clear whether that will shield the Limerick plant from the damaging impact of US sanctions, which have been deferred until October.

“We do still retain a concern about the long-term fate of the company, which we are determined to do everything in our power to assist,” Mr Mulhall said.

“We would share the view that’s pretty universal across the European Union that we need to make a special effort on both sides to avoid a downward movement of relations. We need to stand back and to recognise the things we have in common and to avoid becoming obsessed with the things that at the moment divide us.” – Guardian