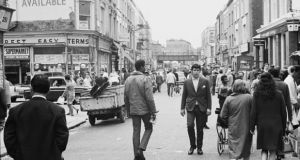 ‘It seems MI5 seriously believed that disaffected ‘coloured people’ could be recruited by the KGB to spy on Britain. Photograph: Michael Putland/Getty Images

Senior MI5 officials believed black people could not be trusted in high-level spying roles as they could be a security risk, according to documents uncovered by an academic.

Declassified files reveal black people were actively being discriminated against in Whitehall in the 1960s because of their race.

The details emerged after the academic Dan Lomas scoured through papers from the interdepartmental committee on security.

The University of Salford professor looked at documents from a period when the Labour government considered introducing racial equality legislation in 1967.

The papers reveal deepening concern in Whitehall at proposals making it illegal to refuse employment to a person on the grounds of colour, which would become enshrined in the 1968 Race Relations Act.

Dr Lomas, a lecturer in international history, said although it was widely known that MI5 had a deep distrust of Jewish people, there was a “surprising omission” of any reference to security concerns about black people in the agency’s official history.

“Since the 1940s, there were bans on communists and fascists working in government. In the 1950s, this was extended to what was described as ‘character defects’, such as homosexuality, mental illness and alcoholism – on the grounds that this would make people vulnerable to blackmail – but these papers reveal the officials also saw race as a security issue,” he said.

“The discussions around new legislation on racial discrimination being introduced in the 1960s seem to have presented a threat to the established, but unspoken, rule that black people risked national security.”

By the 1960s, government departments had started to recruit black people into junior clerical or manual posts, but they were not trusted with secret documents, the files show.

Jabeer Butt, the chief executive of the Race Equality Foundation, said he was not surprised. “Various investigations into the civil service as well as a recent report have all pointed towards the lack of diversity,” he said.

Earlier this year, the UK spy agencies were criticised for their lack of black leaders. According to a report from the parliamentary intelligence and security committee, there is a shortage of black and Asian staff in senior posts.

Neither MI6, which deals with overseas intelligence gathering, nor MI5 had any people from a black, Asian or minority ethnic background in top posts in 2016-17. The surveillance agency GCHQ was the only agency listed as having any staff at a senior level from a BAME background.

Mr Butt said: “To discover that this has been a long-running issue is not surprising considering what the recent report said. It shows yet again that things are not changing and haven’t for a very long time.

“The papers show that identity has always been a big part of who has been appointed, yet history shows those who have gone on to betray the country have nearly always been white British men.”

Minutes from a meeting in the Cabinet Office, attended by the head of the ministry of defence, the director of GCHQ and a senior civil servant from the Treasury, reveal MI5’s concerns about members of the Windrush generation and others living in the UK under the 1948 British Nationality Act.

Security chiefs were concerned that enabling members of ethnic minorities to apply for positions in secret posts would pose a security risk, as they lacked the usual information for background checks. Officials noted that since 1964, “coloured staff” had to have been resident in the UK for 10 years or more for vetting purposes.

But the minutes of the meeting, also attended by the then MI5 director general, Martin Furnival Jones, made it clear security issues went deeper than the amount of time spent in the UK.

MI5 believed the risks of employing “coloured staff” stemmed “simply from the colour of a man’s skin, which gave him a chip on his shoulder. It would be a long time before this chip was removed.”

It is understood the “chip” referred to the possibility that black people were more likely to become disaffected due to fractious race relations in the UK, and therefore susceptible to being persuaded to spy for another country.

Mr Furnival Jones told the committee: “It must be assumed that the communist intelligence services were fully aware of the possibilities of recruiting agents from among disaffected coloured people in this country.”

Dr Lomas said: “This was just two years before Enoch Powell’s ‘rivers of blood’ speech – it seems MI5 seriously believed that disaffected ‘coloured people’ could be recruited by the KGB to spy on Britain.

“However, there is nothing anywhere in MI5’s declassified files to suggest that there were ever any black British spying on Britain. Their relatively small numbers in Whitehall and junior positions would have made them of limited use to the KGB anyway.”

He added: “Perhaps ironically, the real threat had come from elite members of the British establishment, the so-called Cambridge spy ring who had been passing British secrets to the Soviets, or intelligence officials and civil servants who had been blackmailed or passed information for ideological or financial rewards. Nevertheless, the suggestion here is that MI5 simply did not employ black people.”

The MI5 director general, Andrew Parker, said:”Keeping the country safe is a challenge that requires the best efforts of the richest mix of the most talented people in our society, working together in high-performing teams.

“So it is essential to our success that ours is an inclusive workplace offering varied, rewarding and challenging careers for all”.– Guardian Service