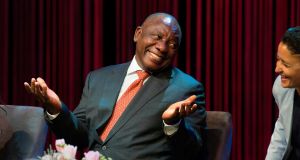 Ramaphosa’s government was left reeling on October 3rd after his close ally, finance minister Nhlanhla Nene, admitted to having private meetings between 2009 and 2014 with a controversial business family accused of corruption.

Athol, Ajay and Rajesh Gupta have been accused of working with former president Jacob Zuma to illegally secure state contracts and determine cabinet appointments. All four have denied any wrongdoing.

To get to the bottom of the allegations of corruption, Ramaphosa set up the Commission of Inquiry into State Capture, Corruption and Fraud in the Public Sector, which began to question witnesses in August.

Among those it called to give evidence since then was Nene, a senior African National Congress (ANC) leader who was surprisingly sacked by Zuma in December 2015 during his first term as finance minister.

On October 3rd Nene gave evidence to the inquiry on the circumstances of his dismissal, a decision he suspects Zuma took because of his refusal to sanction state projects that would benefit the Guptas and their associates.

Nene received much praise for his role in protecting the National Treasury from maladministration, particularly for his opposition to an unaffordable multibillion-euro deal with Russia to build nuclear power stations that Zuma wanted to push through.

However, his confirmation that he had at least four meetings with the Guptas at their Johannesburg home when deputy finance minister – which he previously denied had taken place – prompted opposition parties and sections of society to call for his head.

Nene subsequently issued an apology about meeting the Guptas at their home rather than at his office, once he became aware of the controversies surrounding them, but he maintained he was never asked to help them.

But as the week wore on, a corruption-weary public began to turn against him, despite his apology and efforts to protect taxpayers’ money.

When local media reported last Monday that Nene had offered Ramaphosa his resignation during a weekend phone call, it appeared that South Africa’s president was facing the most significant crisis of his eight-month-old administration.

Nene was the man that Ramaphosa trusted to run the government’s most high-profile ministry when he took over from Zuma, who was forced to stand down as president by the ANC last February.

Nene’s loss would also mean that South Africa had gone through five finance ministers since 2013, a situation that could increase the perception there was little stability at the National Treasury despite Ramaphosa’s efforts to turn it around.

This in turn could adversely affect the president’s goal of securing $1 billion in foreign investment over the next five years to help kickstart South Africa’s faltering economy, and create jobs in a country with an official unemployment rate of 27.2 per cent.

But, rather than back his ally, Ramaphosa acted swiftly. He accepted Nene’s resignation and replaced him with the accomplished Tito Mboweni, a former South African Reserve Bank governor and minister for labour in the 1990s.

Political commentators have said that because Mboweni has been out of government for nearly two decades and has not held a senior position in the ANC since then, he is unaffected by the in-fighting that has consumed the ruling party in recent years.

Ramaphosa has reassured international markets and investors, and showed that no one is above the law anymore, not even his allies

His absence from active politics also suggests he is untainted by state-sponsored corruption, which should help him insulate the National Treasury from further exploitation.

According to Jakkie Cilliers, a political analyst with South Africa’s Institute of Security Studies, the decision to allow Nene to fall on his sword and replace him with Mboweni was both politically and economically very shrewd.

“On the one hand, Ramaphosa has reassured international markets and investors, and on the other he has showed members of government that no one is above the law anymore, not even his allies,” Cilliers said.

Indeed, when announcing Nene’s resignation Ramaphosa said he did so “in the interests of good governance” rather than because the outgoing minister was suspected of wrongdoing.

As well as the former president, many other senior ANC officials aligned with Zuma in the ruling party are suspected of being involved in illegal activities with the Guptas and their associates.

With that in mind, Cilliers said he expected the strength of Zuma’s faction in the ANC to be further eroded by revelations that emerge from the commission of inquiry over the next 18 months.

“In Nene we have a sitting minister who was willing to resign, which is not common in South Africa,” said Cilliers, “He did the right thing by stepping down. Now the bar has been set in terms of what other officials who don’t meet the necessary governance and ethics standards should do.”