In a preview clip from the full interview, Markle was asked by Oprah how she felt about the palace hearing her "speak her truth today." Video: CBS 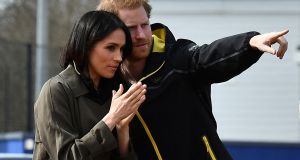 Tensions have escalated between Buckingham Palace and Prince Harry and his wife Meghan, the Duke and Duchess of Sussex, ahead of this weekend’s broadcast of the couple’s interview with Oprah Winfrey. In an excerpt released on Thursday, the duchess appeared to accuse the royal family or their staff of briefing negatively against her.

The 30-second clip shows Ms Winfrey asking her how she feels about the Palace “hearing you speak your truth today”.

“I don’t know how they could expect that, after all of this time, we would still just be silent if there is an active role that The Firm is playing in perpetuating falsehoods about us,” the duchess replies.

“And, if that comes with risk of losing things, I mean, I . . . there is a lot that has been lost already.”

The Firm is a term used to describe the institution of the royal family and it can refer to the royals themselves as well as senior figures who work for them.

Queen Elizabeth’s husband Prince Philip, who is recovering in hospital from a procedure for a heart condition, used the term in 1947 when he said he was “marrying into the Firm”. The prince, who is 99, is expected to remain in hospital for a few days.

Buckingham Palace said it would investigate allegations made in 2018 and reported in the Times this week that the duchess bullied staff. Jason Knauf, one of the couple’s most senior aides, lodged an official complaint in October 2018.

“I am very concerned that the duchess was able to bully two PAs out of the household in the past year. The treatment of [X] was totally unacceptable,” he wrote.

“The duchess seems intent on always having someone in her sights. She is bullying Y and seeking to undermine her confidence. We have had report after report from people who have witnessed unacceptable behaviour towards [Y].”

Mr Knauf now heads a charitable foundation established by Prince William and his wife Catherine, the duke and duchess of Cambridge.

A spokesman for the Duke and Duchess of Sussex told the Times that the paper was being used as part of a campaign against them.

“Let’s just call this what it is – a calculated smear campaign based on misleading and harmful misinformation. We are disappointed to see this defamatory portrayal of The Duchess of Sussex given credibility by a media outlet. It’s no coincidence that distorted several-year-old accusations aimed at undermining the duchess are being briefed to the British media shortly before she and the duke are due to speak openly and honestly about their experience of recent years,” the spokesman said.

“The duchess is saddened by this latest attack on her character, particularly as someone who has been the target of bullying herself and is deeply committed to supporting those who have experienced pain and trauma. She is determined to continue her work building compassion around the world and will keep striving to set an example for doing what is right and doing what is good.”