US Wrap: Administration strongly criticised for decision not to sanction Saudi prince

The United States administration has defended its decision not to take action against Saudi Crown Prince Mohammed bin Salman for his role in the murder of journalist Jamal Khashoggi. 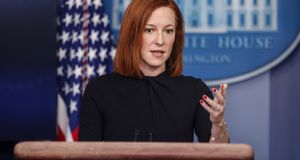 White House press secretary Jen Psaki said the president recognised ‘that there are areas we need to continue to work together on because they are in the interest of the United States’. Photograph: Oliver Contreras/Pool/EPA

The Biden administration has defended its decision not to sanction Saudi crown prince Mohammed bin Salman for his role in the murder of journalist Jamal Khashoggi, amid growing criticism of its stance.

US president Joe Biden released an intelligence report on Friday that concluded the 35-year-old Saudi heir approved the operation that led to the murder and dismemberment of the Washington Post columnist in the Saudi consulate in Istanbul in 2018.

But while the US unveiled new sanctions on the former Saudi deputy chief of intelligence, Ahmed al-Asiri, a close ally of the crown prince, and the Saudi royal family’s rapid intervention force, it stopped short of directly punishing bin Salman.

Pressed on the issue at Monday’s White House media briefing, press secretary Jen Psaki defended the administration’s actions. “We took a number of steps that were considered and determined by our national security team to have the intended impact of this never happening again,” she said.

She noted that the state department had also introduced a new class of sanctions that would ban visas to anyone linked to the detention of dissidents or journalists worldwide.

But she added that Mr Biden recognised “that there are areas we need to continue to work together on because they are in the interest of the United States”.

Ms Psaki was speaking after Khashoggi’s fiancee criticised the US failure to directly punish Saudi Arabia’s de facto ruler. “It is essential that the crown prince, who ordered the brutal murder of a blameless and innocent person, should be punished without delay,” Hatice Cenzig said in a statement.

While welcoming the release of the report, she said “this is not enough, since the truth can only be meaningful when it serves justice being achieved”.

Several high-profile commentators in the US have strongly criticised the Biden administration’s decision, including Washington Post publisher Fred Ryan.

“Hoping that American values would once again be asserted rather than the commercial calculations of the previous administration, American voters took Biden at his word that he would re-establish the United States as a champion of human rights and not allow exceptions based on personal relationships or strategic needs of the moment,” he wrote. Instead, Mohammed bin Salman “is about to escape personal liability for a murder he ordered”.

Agnes Callamard, a UN special rapporteur who led a 2018 investigation into Khashoggi’s murder, said it was “extremely dangerous” for the US to have named the crown prince in the report and not take action against him, as she reiterated her call for sanctions.

Meanwhile, at the UN, newly appointed US ambassador Linda Thomas Greenfield faced questions about the situation in Myanmar as the United States assumed the monthly rotating presidency of the Security Council.

It comes as Myanmar’s military rulers said they had fired the country’s ambassador to the United Nations, Kyaw Moe Tun, a day after he delivered a speech denouncing last month’s coup.

Ms Thomas-Greenfield said that, as it stood, the UN continued to recognise Mr Kyaw Moe Tun as the country’s rightful ambassador. “We have not seen any official request that he be removed and for the time being he is the representative of the Myanmar government,” she said.

According to the UN, 18 people were killed on Sunday when the military fired into crowds of protesters who had gathered in several cities. Ousted leader Aung San Suu Kyi appeared at a court hearing via video conferencing on Monday as supporters continued to march in the streets.

US national security Advisor Jake Sullivan said the US was “alarmed” at the escalation of violence and is preparing “additional actions to impose further costs on those responsible for this latest outbreak of violence and the recent coup”.