British prime minister Theresa May says she will offer the UK parliament a vote on whether to advance with a second referendum on Brexit. Video: Reuters 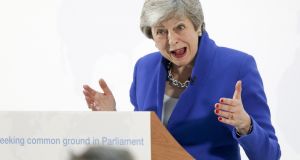 British prime minister Theresa May: “Reject this deal and leaving the EU with a negotiated deal any time soon will be dead in the water.” Photograph: Chris Ratcliffe/Bloomberg

Theresa May has warned MPs that if they vote against the second reading of her withdrawal agreement Bill (WAB) next month, they will be voting to stop Brexit.

The British prime minister said that, after three attempts to win parliamentary approval for her Brexit deal, she was prepared to compromise with Labour by offering a choice of customs options and a vote on a second referendum.

“Reject this deal and leaving the EU with a negotiated deal any time soon will be dead in the water. And what would we do then?” she said.

“Some suggest leaving without a deal. But whatever you think of that outcome, parliament has been clear it will do all it can to stop it. If not no deal, then it would have to be a general election or a second referendum that could lead to revocation – and no Brexit at all”.

Under the prime minister’s proposal, MPs would be able to choose between the government’s “facilitated customs arrangement” and a temporary customs union lasting until the next general election. Downing Street said the government would schedule votes on the customs options soon after the Bill’s second reading in early June, so that it could ask European Union leaders to sign off on changes to the political declaration at their summit in late June.

She said that, if the Bill passes, it will not be ratified until after MPs have had a vote on whether to have a second referendum on Brexit.

“So to those MPs who want a second referendum to confirm the deal: you need a deal and therefore a withdrawal agreement Bill to make it happen. So let it have its second reading and then make your case to parliament,” she said.

Mrs May appealed to MPs to back her deal in order to end the debate about Brexit that she said was corroding British politics and to deliver on the 2016 referendum.

“Look at what this debate is doing to our politics. Extending it for months more – perhaps indefinitely – risks opening the door to a nightmare future of permanently polarised politics,” she said.

“Look around the world and consider the health of liberal democratic politics. And look across the United Kingdom and consider the impact of failing to deliver on the clear instruction of the British people in a lawful referendum.”

There was little sign on Tuesday night that MPs were preparing to answer her call and some Conservatives who voted for the withdrawal agreement last March said they would oppose the WAB. Among them was former foreign secretary Boris Johnson, the frontrunner to succeed Mrs May as Conservative leader.

“With great reluctance I backed MV3. Now we are being asked to vote for a customs union and a second referendum. The Bill is directly against our manifesto – and I will not vote for it. We can and must do better – and deliver what the people voted for,” he said.