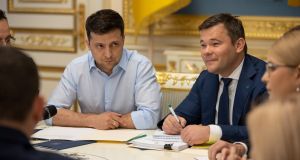 President of Ukraine Volodymyr Zelenskiy (left) and his lawyer and adviser Andriy Bogdan at a meeting with politicians in Kiev. Photograph: Presidential Press Service/via Reuters

Ukraine’s new president, Volodymyr Zelenskiy, has called for snap elections on July 21st to restore the nation’s trust in a parliament that is now deeply unpopular.

On his first full day as head of state, the erstwhile comedy star met party leaders in Kiev to make his case for dissolving parliament and bringing forward elections that were due in October.

He also asked parliament to make urgent changes to Ukraine’s electoral code on Wednesday, when prime minister Volodymyr Groysman has said he will tender his resignation, in a move that will automatically bring down the whole government; the cabinet is likely to stay on in a caretaker capacity until the elections, however.

“The main argument for dissolving [parliament] is the extremely low trust of Ukrainian citizens in this institution,” Mr Zelenskiy said in a statement on Tuesday, before issuing a decree naming July 21st as the date for early elections.

“This is an assessment of the work of the parliament and the most important argument for terminating its powers. As guarantor of the constitution, I am obliged to safeguard the rights of Ukrainian citizens. The legal basis for dissolution is that there has been no [governing] coalition since 2016,” he added.

The ruling alliance officially broke up only last week in an apparent bid to place time constraints on Mr Zelenskiy’s push for snap elections. To avoid those, his administration is arguing that the coalition actually collapsed in 2016, when it lost its majority in parliament following the departure of three other parties.

Some deputies questioned the legality of Mr Zelenskiy’s reasoning, while also saying they would accept and contest early elections that polls suggest will be dominated by the president’s new Servant of the People party.

During his inauguration on Monday, he accused the government of inactivity and urged it to resign and said his landslide election victory last month showed that people were sick of politicians who for three decades had made Ukraine “a country of opportunities – opportunities for kickbacks, cash flow and bribes.”

“We will build a country of different possibilities, where all are equal before the law, with honest and transparent rules of the game that are the same for everyone. But for that to happen, those who will serve the people must come to power.”

Mr Groysman said he had offered to work with Mr Zelenskiy, but the political novice had “chosen a different path”.

“I think that with today’s statement he has taken on full responsibility for the future threats,” that Ukraine faces, he added.

In talks with a US delegation led by energy secretary Rick Perry, Mr Zelenskiy urged Washington to “keep increasing sanctions” against Russia in response to its 2014 annexation of Crimea and lead role in the continuing war in Ukraine’s eastern Donbas region.

Kremlin spokesman Dmitry Peskov said in response: “This rhetoric . . . is not dazzlingly innovative. And the main thing is that it is rhetoric which cannot help Ukraine sort out the problem” in Donbas.