May says leadership challenge has not gained enough support

'Nothing is agreed until everything is agreed... there is more negotiation taking place' - Prime Minister Theresa May says there is potential for changes to the current Brexit deal. Video: Sophie Ridge On Sunday / Sky News 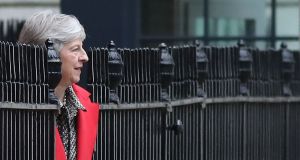 British prime minister Theresa May said on Sunday that as far as she was aware, a formal challenge to her leadership had not yet gained enough support to trigger a confidence vote.

“As far as I know, no, it has not,” May told Sky News, when asked if the threshold had been met for a formal leadership contest.

To trigger a contest, 48 lawmakers from her Conservative Party must submit letter to the chairman of the committee in charge of leadership contests.

She warned party rivals thinking of replacing her as Conservative leader: “It is not going to make the (Brexit) negotiations any easier and it won’t change the parliamentary arithmetic.”

Mrs May said on Sunday the next seven days in the Brexit process would be critical for the country’s future.

“These next seven days are going to be critical, they are about the future of this country,” Mrs May told Sky News.

Former Brexit secretary Dominic Raab, whose resignation last week was a key point in one of her most brutal weeks as prime Minister, suggested she had failed to stand up to a bullying European Union. There were also continuing reports of a plan by senior Cabinet ministers who remain in Government to try to alter the withdrawal agreement at the 11th hour.

Asked if she had considered stepping down she said: “No I haven’t. “Of course it has been a tough week, actually these negotiations have been tough right from the start, but they were always going to get even more difficult right toward the end when we are coming to that conclusion.”

She added that the next seven days “are going to be critical”, and said she would be travelling back to Brussels to talk with key figures including Jean-Claude Juncker, the European Commission president ahead of an emergency European Council summit on November 25th.

Jeremy Corbyn trashed Theresa May’s Brexit deal, telling Sky News that it was a “one-way agreement” in which the EU “calls all the shots”.

He said: “We’ll vote against this deal because it doesn’t meet our tests. We don’t believe it serves the interest of this country, therefore the government have to go back to the EU and renegotiate rapidly.

Asked if he could stop Brexit, the Labour leader said: “We couldn’t stop it because we don’t have the votes in Parliament to do so.”

He added: “There was a referendum in 2016, a majority voted to leave the EU, there are many reasons why people voted. I don’t think you call a referendum and then say you don’t like the result and go away from it, you’ve got to understand why people voted and negotiate the best deal you can.”

Asked if he would support Remain in a second referendum, he said: “I don’t know how I am going to vote, what the options would be at that time.” – Reuters/PA