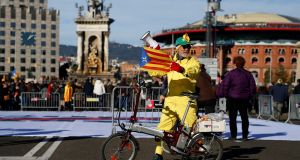 A man attends a concert organised by the pro-independence Catalan National Assembly to demand the release of jailed Catalan cabinet members, at Plaza Espanya square in Barcelona on Sunday. Photograph: Javier Barbancho/Reuters

The campaign ahead of Catalonia’s December 21st election begins on Tuesday, with the pro-independence movement still bruised by its recent failed attempt to break away from Spain and unionist parties desperate to take control of the region’s parliament.

Spanish prime minister Mariano Rajoy called the election as part of his decision to introduce direct rule in Catalonia. That move followed a disputed referendum on secession in October and its chaotic fallout, culminating in a unilateral declaration of independence by the regional parliament which has failed to come into effect.

In recent weeks, Catalonia has been in a state of political limbo: many of the regional administration’s powers have been overridden by the central government, the deposed Catalan president, Carles Puigdemont, is in exile in Belgium and most members of his former cabinet have spent the last few weeks in prison awaiting trial for sedition and rebellion.

Six of those colleagues were set bail of €100,000 each by the supreme court on Monday, although two others, including former Catalan deputy president Oriol Junqueras, remain in custody. Jordi Sánchez and Jordi Cuixart, the leaders of two pro-independence civic organisations who have been in jail since September, were also refused bail.

Mr Rajoy’s decision to call a December election was seen as a way of ensuring that direct rule is kept short and as an attempt to return the northeastern region to stability.

“These elections are historic, they’re very important for Catalonia, for the whole of Spain and for Europe,” said Inés Arrimadas, leader in Catalonia of Ciudadanos, the dominant unionist party in the region.

“It’s the best option with which to return to democratic normality and hand our institutions back to Catalans,” she added. “This isn’t a utopian scenario, or a perfect scenario [but] it’s the best solution on offer.”

But Catalans remain deeply divided over the sovereignty issue, making the election something of a gamble for Mr Rajoy.

A poll published by the CIS research centre on Monday showed that pro-independence parties are marginally ahead of constitutionalist parties, although just short of maintaining the majority they had in the outgoing regional parliament.

Ciudadanos’s strident unionism and advocacy of direct rule has boosted it in the polls, both in Catalonia and across Spain. However, even the support of the Socialists and Mr Rajoy’s Popular Party (PP), both of which opposed the recent independence drive, is unlikely to be enough to make Ms Arrimadas the next Catalan president.

The election campaign will see the unionist parties portray direct rule, implemented via the first-ever use of article 155 of the constitution, as a success, given that it has not triggered the kind of rejection or social unrest that many had predicted.

“Now everybody knows that the [Spanish] state can defend itself and that when someone attacks it it will always act, because that’s its duty,” Mr Rajoy said recently, as he justified the introduction of the measure.

Meanwhile, for pro-independence parties, the upcoming campaign is a chance to restore morale after the failed secessionist drive of October.

Last month, Marta Pascal, leader of Puigdemont’s Catalan Democratic Party (PdeCat), admitted that “we saw as very easy something which perhaps isn’t so easy but which was possible”. She pointed to the lack of international recognition of the declaration of independence as one of the main obstacles she and her allies had failed to foresee.

Until the introduction of direct rule, PdeCat had been governing in a coalition with the Catalan Republican Left (ERC) and with the support of the anti-capitalist Popular Unity Candidacy (CUP). All three parties remain committed to independence, but they will be running separately in this election, offering different paths to that goal. PdeCat and the ERC, which is leading opinion polls among pro-independence parties, now both hope to rally the separatist vote by proposing a less strident approach to creating a Catalan republic, while the CUP remains intent on unilateral secession.

Mr Puigdemont, who appeared before a judge in Brussels on Monday as part of Spain’s attempts to extradite him and is unlikely to return to Spain before the election, insists he remains the legitimate president of Catalonia and will campaign as such from Belgium.

However, since going into exile with four of his former cabinet ministers, Mr Puigdemont has occasionally spoken with a more strident tone than his party. Last week he cast doubt over his commitment to the new bilateral path to independence being pitched by his colleagues in Barcelona.

He has also expressed frustration with the European Union’s refusal to intervene in the Catalan crisis, even mooting the possibility of a referendum on the region’s exit from the bloc.

Mr Puigdemont’s tough talk appears to be going down well with many voters, boosting the performance of his party. However, it could expose tensions between the secessionist forces which had previously been kept behind closed doors.

“He’s aiming at the hardline pro-independence voter, who might feel abandoned by ERC’s new strategy,” noted Oriol Bartomeus, a political scientist at Barcelona’s Autonomous University (UAB). “The game is on.”

Despite their differences, the pro-independence forces will together be seeking to retain the majority of seats they won in 2015, and ideally they want to gain more than half of the popular vote, a target they fell short of two years ago and which undermined their push for independence.

But with the political landscape so finely balanced, it is possible that neither unionists nor separatists are able to form a government alone. It could fall to Catalunya en Comú Podem, a leftist coalition which advocates a Scotland-style independence referendum while supporting territorial unity, to decide the future of Catalonia.

1 Bobby Storey: The IRA's planner and enforcer who stayed in the shadows
2 Full line up of junior ministers unveiled as Taoiseach accused by one TD of snub
3 Open Ireland as soon as possible - Tourism chief warns of 'catastrophic' impact of pandemic
4 World, look away now – these are dark days for the United States
5 Who are the new junior ministers? All their profiles are here
Real news has value SUBSCRIBE