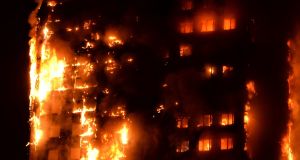 The 24-storey Grenfell Tower had been refurbished with external cladding which is now the prime suspect as the accelerator of the fire. Photograph: Giulio Thuburn/AFP/Getty Images

The charred hulk of Grenfell Tower, a 24-storey flat block in west London, was still smouldering last night as its residents, taking shelter in nearby churches and gym halls, wondered how many of their neighbours were still inside. Police confirmed 12 dead but expected the death toll to rise as the fire brigade attempted to make an audit of the building to determine who had failed to escape the inferno.

The blaze in the council housing block, in an impoverished enclave sandwiched between some of London’s smartest neighbourhoods, started just before 1am. The fire moved slowly at first but suddenly gained pace, taking light like a Roman candle as it spread from one flat to the next, sweeping upwards and trapping the residents inside.

“I am deeply saddened by the tragic loss of life at Grenfell Tower. My thoughts are with all those affected and the emergency services,” prime minister Theresa May said last night as talks with the Democratic Unionist Party about supporting her government were postponed.

More than 200 firefighters tried to tackle the blaze amid scenes of horror, with reports of people jumping from the building rather than perish in the flames. One witness said that a baby was caught by a member of the public after being dropped from the ninth or 10th floor.

Local churches and mosques moved into action within a few hours of the fire, creating makeshift shelters and accepting donations of food, water, bedding and clothing. Many of those who escaped left with nothing except what they were wearing in the middle of the night, and residents of nearby buildings who were evacuated stood in the streets nearby, often shocked and silent.

Neighbours called missing friends again and again, hoping that they had miraculously escaped from the 15th or the 17th floor of the burning building.

As the community pulled together, questions were asked about safety standards at the block and repeated warnings from residents which were ignored. The building had been refurbished at a cost of millions and given a facelift with exterior cladding which gave the 1970s block a more contemporary look – and which is now the prime suspect as the accelerator of the fire.