London fire: Woman tried to save baby by dropping it ‘from ninth floor’ 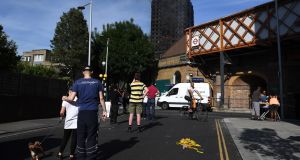 Witnesses to the deadly fire at Grenfell Tower in London have been giving traumatic accounts of desperate attempts made by residents to flee the flames.

Samira Lamrani said she saw a woman try to save a baby by dropping it from a window “on the ninth or 10th floor” to waiting members of the public below.

Tiago Etienne (17), heard people pleading for help as the building was engulfed in flames.

She said: “I saw children being thrown out of the building from as high as about the 15th floor. They were young - aged probably between four and eight. I saw three thrown out.

“I think they were being thrown out for the firefighters or police to catch, but I couldn’t see from where I was who was at the bottom and what they were catching them in.”

Local councillor Judith Blakeman, who lives opposite the tower, rushed outside when she heard about the blaze at 5am.

She said: “Neighbours had been watching it all night, they said the cladding went up like a nightdress by a fire - it just went whoosh.”

Residents who escaped complained there had been no fire alarm, with many relying on neighbours to wake them as the blaze spread, and said official advice in the event of a fire had been to stay inside.

Michael Paramasivan, who was in his seventh floor flat with girlfriend Hannah West (23), and her daughter Thea, five, said: “If we’d listened to them and stayed in the flat we’d have perished.”

“About 12 floors up I saw three children waving from a window and then there was just an explosion and they disappeared.

“They were three kids, they were banging on the windows, you could see their silhouettes and then bang, it just went up.”

Flowers had been placed beside the taped-off police cordon, which was being guarded by uniformed officers.

Attached to a mixed bouquet was a card with the message: “Love and prayers to the families and victims. Justice has to be done. People before money. RIP.”

This morning, local resident Tamara told BBC News: “Around 12.30/1am my mum called me and said there was a fire outside. By the time I got there the whole right side of the building was on fire, the whole thing was engulfed in flames.

“We could hear people screaming ‘Help me’ so me and my brother, with some other people who live in the area, ran over to the estate to where you could still get underneath it and there were people just throwing their kids out saying ‘Save my children’.

“The fire crew, ambulance and police couldn’t do anything, they couldn’t get in, and they were just telling them to stay where they are, and we’ll come and get you. But things quickly escalated beyond measure and they couldn’t go back in and get them.

“Within another 15 minutes the whole thing was up in flames and there were still people at their windows shouting ‘Help me’. You could see the fire going into their houses and engulfing the last room that they were in.”

Another witness, Samira, told BBC News: “It escalated really quickly. Around midnight the fire was only around the third floor and then, before you know it, the whole 23 floors of the building were all on fire and there were people screaming for help and throwing kids out.

“I think everyone felt really helpless because no-one could get to them.

“There was a lot of people there — children, elderly people and disabled people; my family members, who thankfully made it out. But there are still a lot of people who are unaccounted for.”

Tamara went on: “My brother has a lot of school friends who are still wondering if their friends have made it out, they haven’t got in contact with them or heard anything. One of the girls lives on the top floor, which the police advised that if you were living on that floor that it is most likely that they haven’t made it.”

“I saw people flying out of their balconies and windows. I saw a man who flew out of his window, I saw people screaming for help. We saw a lot of people jumping out that basically didn’t make it. It was from the eighth floor and up, and that kind of floor you wouldn’t really make it.”

Tamara continued: “I had a family friend that was stuck all the way up till 5am but luckily she made it out and some others from her floor and the floors below made it out.

“But there are people who were higher up that they just couldn’t get to because it just got out of control so quickly.

Another resident, called Zara, said she saw a woman throw her son, who was about five years old, from a fifth or sixth floor window to escape the blaze.

She told LBC: “One woman actually threw her son out of the window. I think he’s OK.

“I think he might have just had some broken bones and bruises.

“I left my phone at home so I went back to grab it and, by the time I got back, the road was completely blocked off, the fire had dramatically spread.

“It was like a scene from a Hollywood movie.”

Asked about which floor the boy was thrown from, she said she thought it was the fifth or even the sixth.

“There was another woman screaming ‘my baby, my baby, I need to get out, I need to save my baby’.

“But we were just looking up. We couldn’t do anything. There was nothing we could do.”

Another caller, Linda, told the station how she watched huge chunks of polystyrene type material falling from the building.

“It was everywhere, it was like snow,” she said.

“There were larger sheets and small pieces.

“It was coming down everywhere.”