Spending cuts may have contributed to London fire - Corbyn 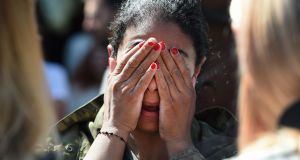 Leader of the British Labour party Jeremy Corbyn has suggested spending cuts could have contributed to the deadly fire at Grenfell Tower today in which at least six people have died.

He said “searching questions” need to be asked about what happened at the west London tower block, adding: “If you deny local authorities the funding they need, then there is a price that’s paid.”

Mr Corbyn told LBC Radio that calls for sprinklers to be installed in high-rise buildings after a fatal fire at Lakanal House in south London in 2009 had not been heeded.

He said: “Harriet Harman, who is the MP for Camberwell and Peckham, raised all these issues after that fire and ... demanded that sprinklers should be fitted to all of these buildings.

“I suspect they have not been in many places. I don’t know all of the details for the whole country but, if you deny local authorities the funding they need, then there is a price to pay that’s paid by the lack of safety facilities all over the country.

“I think there needs to be some very searching questions asked as quickly as possible in the aftermath of this fire.”

The office of prime minister Theresa May said she was “deeply saddened” by the disaster and would convene a 4pm meeting to coordinate the government’s response.

Speaker of the House of Commons John Bercow offered condolences on behalf of MPs to the victims of the “unimaginable and horrific disaster”.

Mr Bercow said MPs offered their “warmest and most effusive thanks” to the “magnificent” emergency services who responded to the huge fire at the west London tower block.

He said it is not possible for Parliament to officially discuss the tragedy in the chamber as it has yet to officially convene following the general election last week.

A meeting with a minister is expected to take place in the Palace of Westminster to enable questions from MPs, Mr Bercow added.