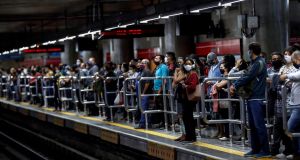 As the coronavirus outbreak in Brazil escalates, independent efforts to map out the scale of the crisis are intensifying amid concerns official numbers do not capture the full impact of the pandemic.

This week 200 human-rights groups filed petitions with the United Nations and Organisation of American States appealing for the international organisations to demand explanations from Brasília about the rapid spread of Covid-19 in Brazil’s prison system. They denounced the lack of official information being provided about what they fear is a “catastrophe of worrying proportions” in the country’s prisons due to the spread of the virus.

The petitions reflect increasing fears among the country’s rights campaigners that failures in data collection mean the disproportionate impact of the pandemic on Brazil’s most vulnerable citizens is not being fully captured.

In another initiative Agência Pública, one of Brazil’s leading investigative journalism organisations, this week launched a campaign to gather data on the real scale of the pandemic’s impact on the country, which it says the government is attempting to hide.

There is widespread scepticism of Brazil’s official death toll, the second highest in the world after the US, because the chronic lack of testing means there has been massive under-reporting, according to public health experts.

As well as confirmed coronavirus cases Brazil has seen a surge in cases of severe respiratory syndrome not reported as coronavirus because of the lack of testing.

An alliance of Brazil’s leading media organisations has already come together to work with the health secretariats of state governments to produce reliable numbers for the country on infections and deaths from confirmed cases.

The consortium initiative was in response to the federal health ministry suddenly changing its methodology for counting deaths from Covid-19 earlier this month.

This led to heavy criticism from experts and accusations it was an attempt to cover up the extent of the pandemic’s toll. A supreme court judge later ordered the government to reverse the changes.

As of Wednesday night the consortium said total deaths had reached 53,874 and 1,192,474 people had been infected. It means Brazil now accounts for 13 per cent of deaths and 11 per cent of confirmed cases during the pandemic despite being home to only 2.7 per cent of the world’s population.

After guarded optimism last week that the country was beginning to flatten the curve of new infections, the health ministry has said last week’s data points to a “significant increase in new cases”. The surge follows the easing of quarantine restrictions in many regions despite the failure to get the reproduction rate of the virus below one, meaning the outbreak remains out of control.

Brazil’s health ministry has been without a full-time head since May 15th, with army general Eduardo Pazuello serving as interim minister.

With no background in public health, he was widely mocked after earlier this month he suggested the pandemic’s intensity in Brazil’s equatorial and tropical regions was because these are closer and so “more linked to the northern hemisphere’s winter”.