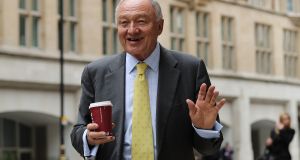 Former mayor of London Ken Livingstone had threatened to launch a judicial review if he was expelled from the Labour Party. Photograph: Dan Kitwood/Getty Images

Former London mayor Ken Livingstone has been suspended from the Labour Party for one further year over controversial comments about Adolf Hitler and Zionism, following a disciplinary hearing in London.

Mr Livingstone, who had threatened to launch a judicial review if he was expelled from the party, said he would now consult with lawyers about his legal position.

The former mayor said earlier he had expected to be expelled because the disciplinary panel investigating the case was dominated by “right-wingers”.

“The NCC consequently determined that the sanction for the breach of Labour Party rules will be suspension from holding office and representation within the Labour Party for two years.

“Taking account of the period of administrative suspension already served the period of suspension will end on April 27th, 2018. The Labour Party will make no further comment on this matter.”

Last August, Mr Livingstone said: “When Hitler won his election in 1932 his policy then was that Jews should be moved to Israel. He was supporting Zionism before he went mad and ended up killing six million Jews.”