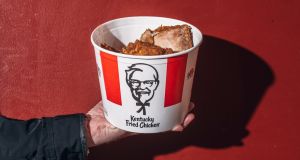 Winging your way: Postmen and postwomen in New Zealand may soon be calling to houses with Kentucky Fried Chicken rather than letters or parcels. Photograph: Cole Wilson/New York Times

The New Zealand postal service has begun delivering Kentucky Fried Chicken in a bid to stem major revenue losses as the number of people using the postal service continue to plummet.

NZ Post and the fast food company have joined forces in a pilot scheme in the North Island port city of Tauranga, with KFC contracting NZ Post to handle the logistics of its new home-delivery service.

Mike Stewart, a spokesman for NZ Post, said the company was grappling with how to survive long-term, when every week Kiwis sent a million fewer letters than the week before.

In the last decade the number of letters sent in New Zealand has halved. In an attempt to stem the losses, the price of sending a medium-size letter by FastPost is scheduled to rise by 50 cents in July from $1.80 to $2.30.

Postal delivery in many rural areas of New Zealand has also been reduced from six days to five.

“All post offices around the world are struggling with what to do when mail disappears, we want to survive for another 100 years but we urgently need to diversify our business,” said Mr Stewart.

“People want their goods on-demand delivered to their home in 30-60 minutes – that seems to be where the world is going. So we’ve been experimenting with being the delivery service for the health sector, the construction sector and especially hospitality . . . it is an exciting time for us.”

NZ Post has so far recruited 30 delivery drivers for the KFC Tauranga pilot. While NZ Post operatives are welcome to apply for the extra evening shifts, at this stage most of the new drivers were students or retirees, said Stewart, who would be using their own transport and smartphones to co-ordinate deliveries.

Using NZ Post operatives and vans for deliveries in the future was “not out of the question” said Mr Stewart.

Tauranga is the second New Zealand city to be offered home-delivered KFC, with the company planning to roll out the service across about half of New Zealand.