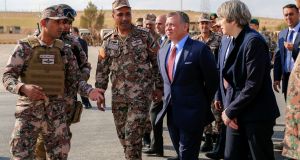 King Abdullah II of Jordan with British prime minster Theresa May during their visit to a military base near Amman on Monday. Photograph: Jordanian Royal Palace/AFP/Getty Images

A cross-party committee of MPs will on Tuesday urge Theresa May’s government to carry out a thorough assessment of the consequences of leaving the European Union without a deal.

A report by the House of Commons Brexit committee says the government should also set out what contingency plans it has made for such an outcome.

The committee’s chairman, Labour MP Hilary Benn, said Britain should not be allowed to crash out of the EU in a disorderly Brexit without a vote in parliament.

Parliament must be in an informed position to decide whether a proposed deal is, in fact, better or worse than no deal

“Without an economic impact assessment of ‘no deal’ and without evidence that steps are being taken to mitigate the damaging effect of such an outcome, the government’s assertion that ‘no deal is better than a bad deal’ is unsubstantiated.

“Parliament must be in an informed position to decide whether a proposed deal is, in fact, better or worse than no deal,” he said.

“Leaving the EU without a future trade deal and in doing so defaulting to World Trade Organisation (WTO) rules is no less an important decision for the UK’s economic future than the terms of any future free trade agreement between the UK and the EU.

“It is therefore essential that such a step is not taken without parliament having a vote on the matter.”

The report also calls on the government to offer more detail about the kind of customs arrangement it wants from the EU after Brexit.

Ms May, who began a three-day trade mission to Jordan and Saudi Arabia on Monday, has said that Britain will leave key parts of the EU customs union, so that it will be able to negotiate new, bilateral trade deals with countries around the world.

The Brexit committee visited Dublin during their research for the report and they warn about the impact on Ireland of Britain leaving the EU without a deal and report that Irish officials remain concerned about the future of the Border.

“Irish politicians welcome the government’s aspiration of maintaining a seamless border, but, at present, do not understand how this can be achieved in practice, given the obligations which Ireland will have as an EU member state bordering a third country.

“With the goodwill that currently exists on both sides of the Border, we hope that a mutually acceptable solution can be found. This must be at the top of the list of the government’s negotiating objectives,” they say.

The report comes as an ICM poll for the Guardian has found that at least two out of three British voters would oppose paying an “exit bill” to the EU of more than £10 billion.

The European Commission has suggested that Britain may have to pay up to £60 billion and the Sunday Times reported this week that British treasury officials believe the bill could be around £20 billion.

The prime minister on Monday laughed off the suggestion by former Conservative leader Michael Howard that she should show the same resolve over Gibraltar as Margaret Thatcher when she went to war with Argentina over the Falklands.

After a Downing Street spokesman ruled out sending a military taskforce to defend Gibraltar against Spanish sovereignty claims, Ms May said she would deal with the issue through diplomacy.

“What we are doing with all European countries in the European Union is sitting down and talking to them. We are going to talk to them about the best possible deal for the United Kingdom and for those countries, Spain included. It’s definitely jaw-jaw,” she said.

The EU said last week that no post-Brexit trade agreement with Britain could apply to Gibraltar without the approval of Spain, which is seeking joint sovereignty over the Rock as a step towards reclaiming the territory it ceded to Britain in 1713.

Thousands march in Bangkok in weekend of pro-democracy protests 20:40
US declares all international sanctions against Iran restored 20:12
Belarusian police have personal details leaked by hackers 18:01
Trump gives blessing to deal to allow TikTok to continue to operate in US 18:00
Crowds gather in Washington DC to mourn Ruth Bader Ginsburg 17:17