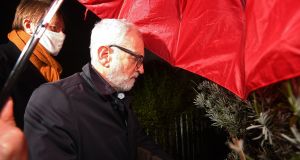 The left of Britain’s Labour Party has called for Jeremy Corbyn to be swiftly reinstated, with a group representing more than 30 MPs declaring it would “work tirelessly” in support of the former leader until his case is resolved.

Following his suspension on Thursday over comments about anti-Semitism, Mr Corbyn convened a call with leaders from Unite and the Communication Workers Union, as well as supportive MPs, the party pressure group Momentum and other left affiliates.

The group was divided over whether Mr Corbyn’s suspension by Labour was premeditated but agreed to mobilise party members in support of him while also seeking conciliation with the party and its leader, Keir Starmer, to see whether an amicable way back for Mr Corbyn could be found.

If the party seem determined to press ahead with tough action, one source at the meeting said it could “get very big and very divisive very quickly”.

Momentum said it would “not take attacks on the left lying down” as it sought to rally Corbyn supporters. Key figures in parliament and the unions, however, downplayed talk of a party split.

The Socialist Campaign Group, which comprises 33 Labour MPs, representing a sixth of the parliamentary party, released a short statement saying it “firmly opposed” Mr Corbyn’s suspension, which followed his reaction to the publication of the Equality and Human Rights Commission (EHRC) report into anti-Semitism within Labour.

John McDonnell, a long-time Corbyn ally, sought to strike a conciliatory note. Urging “all party members to stay calm” the former shadow chancellor said: “In the interests of party unity, let’s find a way of undoing and resolving this.”

Few other MPs in the Socialist Campaign Group – normally Mr Corbyn’s bedrock of support at Westminster – were willing to be publicly drawn into the row.

Nadia Whittome, who was first elected in 2019, said she “unequivocally” supported the EHRC’s recommendations, in a lengthy statement that made no mention of Mr Corbyn or his suspension. “It is vital that we learn from our mistakes and change our party for the better,” she said.

One shadow cabinet member said: “I’d be surprised if any quit the party. Several members from all sides did that in the last parliament, and they all ended up losing their seats.”

Insiders at Unite, the most significant Corbyn-supporting trade union, said they were “staggered” by the suspension decision. But Len McCluskey, the union’s general secretary, called on “members angered by this suspension not to leave the party” – in effect urging them to fight from within.

The suspension, Mr McCluskey said, was “an act of grave injustice”, which he argued would “create chaos within the party and in doing so compromise Labour’s chances of a general election victory. A split party will be doomed to defeat.”

Dave Ward, the general secretary of the Communication Workers Union, said: “Keir Starmer’s political decision to suspend Jeremy Corbyn – a lifelong anti-racist campaigner – flies in the face of the report.”

Labour’s left had been in retreat among the membership, as demonstrated by Sir Keir’s significant victory in the party’s leadership contest in April, with the left-wing candidate Rebecca Long-Bailey winning 28 per cent of the vote. On Thursday it was unclear how far Mr Corbyn’s suspension would galvanise them.

Nevertheless, the “stand your ground” message was being widely shared by organisations such as Momentum. Its organisers said there had been “an explosive response” to an email from co-chairs Andrew Scattergood and Gaya Sriskanthan to its membership on Thursday lunchtime.

“This suspension risks politicising Labour’s response to anti-Semitism. It is a massive attack on the left by the new leadership and should be immediately lifted in the interests of party unity,” the two wrote in their email. “They want us to give up. They want us to throw in the towel. They want us to feel despair. But we’re not going anywhere.”

Momentum said it had called an emergency meeting of its national co-ordinating group to work out its response.

One Momentum member wrote back saying Mr Corbyn’s suspension had “shook me to the core” and that they had immediately considered resigning. “But as you say we must stand up and fight for the left and true socialism. I am dismayed to think that this may cause a civil war within the Labour party,” they wrote in an email shared with the Guardian.

Donations to a fighting fund already set up by a Corbyn supporter to help pay for costs in a separate legal action soared on Thursday. It has raised about £350,000 (€388,000), which would easily be enough to afford the former leader experienced legal representation if required during any disciplinary proceedings. - Guardian