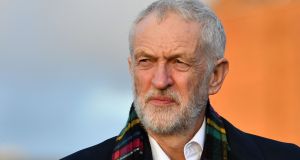 Jeremy Corbyn rejected some of the report’s findings and claimed the issue had been ‘dramatically overstated for political reasons’ by his critics. File photograph: Paul Ellis/AFP

Keir Starmer, the Labour leader , has suspended his predecessor Jeremy Corbyn after a damning official report into anti-Semitism in the UK’s main opposition party.

The move threatens to expose deep rifts within the party which still contains a large faction loyal to Mr Corbyn – who said he would contest the decision.

Sir Keir acted after reading Mr Corbyn’s response to findings by the equalities watchdog that the party was guilty of “unlawful acts of harassment and discrimination” involving anti-Semitism during Mr Corbyn’s leadership.

Mr Corbyn wrote on Facebook that he did not accept all of the findings of the Equality and Human Rights Commission report and added: “One anti-Semite is one too many, but the scale of the problem was also dramatically overstated for political reasons by our opponents inside and outside the party, as well as by much of the media.”

His suspension, marking a determination by Sir Keir to move the party away from the “hard left” Corbyn era, prompted comparisons to 1995 when former leader Tony Blair dropped “clause IV”, Labour’s totemic pledge to nationalise industry.

The anti-Semitism inquiry, which began in May 2019, found that the party under Mr Corbyn was responsible for three breaches of the Equality Act (2010) during his four-year leadership.

Those breaches related to harassment, political interference in anti-Semitism complaints and failure to provide adequate training to those handling complaints.

Sir Keir said the “clear and stark” findings in the 128-page report left no room for equivocation for Britain’s main opposition party. “The report finds serious failings in leadership, processes and culture in dealing with anti-Semitism within our party,” he said.

The Labour leader promised to implement all of the EHRC recommendations, including an improved complaint handling process, an updated social media code and new training for staff.

Describing Thursday as a “day of shame”, he said: “On behalf of the Labour party I am truly sorry for all the pain and grief that has been caused to Jewish people.”

Sir Keir served as shadow Brexit secretary under Mr Corbyn but on becoming leader in April he pledged to root out anti-Semitism among the membership.

In his response to the EHRC report, Mr Corbyn said that the party’s processes for handling complaints were “not fit for purpose” when he became leader in 2015.

Attempts to reform them had been stalled by an “obstructive party bureaucracy”, he insisted, and after Jennie Formby became general secretary in 2018 there were “substantial improvements”. “My team acted to speed up, not hinder the process,” he wrote.

Intermediaries urged Mr Corbyn to retract the statement, in particular the part that the claims had been “dramatically exaggerated”. But the 71-year old “doubled down” on his position, according to people familiar with the conversations. “He dug his heels in,” said one.

It was David Evans, the party’s general secretary, who issued the letter suspending Mr Corbyn.

Announcing the suspension, the Labour spokesperson said: “In light of his comments made today and his failure to retract them subsequently, the Labour party has suspended Jeremy Corbyn.”

The announcement prompted a backlash from left-wing “Corbynistas” such as Aaron Bastani of Novara Media, who claimed: “One might argue there was a premeditated plan to smash the left.”

Allies of Sir Keir denied such claims. “This was not a pre-prepared attack on the left,” said one. “Jeremy’s own allies said ‘don’t do it’. This was an act of self-destruction.”

The leader had avoided any personal criticism of Mr Corbyn in his earlier press conference, the ally pointed out.

Mr Corbyn said on Twitter he would “strongly contest the political intervention to suspend me”. “I’ve made absolutely clear those who deny there has been an anti-Semitism problem in the Labour party are wrong,” he added. “I will continue to support a zero-tolerance policy towards all forms of racism.”

Sir Keir previously sacked Rebecca Long Bailey, his rival for the leadership, as education spokesperson after accusing her of sharing an article containing an anti-Semitic conspiracy theory.

The party has until December 10th to draft an action plan to implement the EHRC recommendations, which is legally enforceable by the courts if not fulfilled.

The EHRC identified “serious failings in leadership” under Mr Corbyn and an “inadequate process” for handling complaints despite some recent improvements. “Our analysis points to a culture within the party which, at best, did not do enough to prevent anti-Semitism and, at worst, could be seen to accept it.”

Alasdair Henderson, EHRC commissioner, said Mr Corbyn “does ultimately have responsibility for these failings”. “There were some improvements made by him but not nearly enough,” he said.

The commission said Labour had failed to implement fully the recommendations made by three investigations in 2016.

It said it had found 23 instances of inappropriate involvement by the leader of the opposition’s office into anti-Semitism complaints. Although some were requests for tougher action these interventions were an “unlawful action” that undermined Labour’s processes.

Labour’s complaints process was not properly resourced, those responsible for it were not trained to the necessary standard and many complaints were not even investigated, the report found.

The commission identified two individuals by name, former London mayor Ken Livingstone and Pam Bromley, a Labour councillor in Lancashire, whose anti-Semitic conduct the Labour party was responsible for because they were its “agents”.

In a joint statement, three Jewish organisations – the Board of Deputies of British Jews, the Jewish Leadership Council and the Community Security Trust - called the report a “damning verdict on what Labour did to Jews under Jeremy Corbyn and his allies”. – Copyright The Financial Times Limited 2020