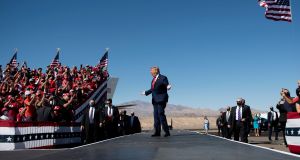 Rival presidential candidates Donald Trump and Joe Biden both head to the key swing state of Florida on Thursday, as the US election campaign enters its final stretch with just five days to go until polling day.

Mr Trump, who is seeking a second term in office in the ballot on November 3rd, will hold a campaign rally in Tampa before heading to North Carolina for an event in Fayetteville later in the day.

Democratic candidate Joe Biden will also campaign in Tampa, though it is expected his event there will take place in the evening, avoiding a crossover with the president in the Gulf Coast city. The former vice-president is also due to campaign in Broward County, just north of Miami, on Thursday, his campaign said.

The dual appearances come as the presidential race remains tight in the Sunshine State. The latest poll – released by Florida Atlantic University on Tuesday – showed Mr Biden with a 2 percentage point lead there over his rival. But Mr Trump remains ahead fractionally, according to the Real Clear Politics average of polls, with a 0.6-point lead.

With 29 electoral college votes, Florida is a key focus for both campaigns, as each candidate seeks a path to the 270 electoral votes needed to win next Tuesday’s presidential election.

As Mr Trump campaigned in Arizona and Nevada on Wednesday, Mr Biden sought to keep the focus on the president’s handling of the coronavirus pandemic, as the number of Americans infected with Covid-19 continued to rise. On Tuesday alone, 74,000 new cases were reported across the US, with numbers rising in several midwestern states where the president has been holding campaign rallies in recent weeks.

Speaking in Delaware following a health briefing with public health officials, Mr Biden blasted the president’s response to the pandemic that has killed more than 227,000 Americans.

“The longer he’s in charge, the more reckless he gets. It’s enough. It’s time to change,” he said. He pledged that, if elected president, he would “let science decide our decisions.

Mr Trump has defended his response to the pandemic. A memo released by the White House late on Tuesday said that the president had “saved over 2 million lives and outperformed other nations” in responding to the US outbreak.

The president was “following the science by protecting the vulnerable, preventing hospital overcrowding, and saving lives while ending harmful lockdowns”, the memo said.

Speaking at his second rally of the day in Arizona on Wednesday, Mr Trump predicted he would win the southern state next week.

Stock markets continued their downward slide on Wednesday, amid rising coronavirus infection rates in the US and Europe.

In a separate development, the anonymous source who penned a controversial opinion piece in the New York Times in 2018 that was highly critical of Mr Trump was revealed on Wednesday to be Miles Taylor, a former chief of staff at the department of homeland security. Mr Taylor has publicly voiced his opposition to Mr Trump, and endorsed Mr Biden for president in August.