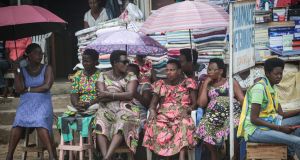 Burundi has expelled officials and experts from the World Health Organisation (WHO) ahead of next Wednesday’s presidential elections, which will go ahead despite the coronavirus pandemic.

In a letter seen by The Irish Times, Burundi declared WHO representative Dr Walter Kazadi Mulombo and his team of experts “persona non grata” and ordered them to leave the country by Friday. Dr Mulombo was co-ordinating the Covid-19 response there.

“We are in communication with the government of Burundi to clarify and understand the reasoning behind this decision they have taken,” Dr Matshidiso Moeti, the WHO’s Africa director, told journalists on Thursday. “We are in the meantime . . . working to organise the departure of our staff.”

There have been just 15 cases of Covid-19 confirmed in Burundi. Across Africa, there are now more than 72,000 confirmed cases.

The attitude of Burundi’s leaders towards the coronavirus pandemic has run counter to many of its neighbours, where strict lockdowns were imposed months ago.

Covid-19 response workers in east Africa are concerned that a surge in cases in the Great Lakes country, which has a population of more than 11 million, could have a knock-on effect across the region, despite borders being closed.

Burundians have been taking part in large political rallies for weeks, and there are increased concerns about the likelihood of clashes in the country, as well as the spread of disease. At least two people were killed during a grenade attack on a bar in economic capital Bujumbura on Monday.

In 2015, violence broke out across the country when president Pierre Nkurunziza ran for a third term in office, despite critics decrying it as unconstitutional. More than 1,200 people died while hundreds of thousands fled the country – many still haven’t returned.

The UN has since accused the government of human rights abuses, including torture, executions, and sexual violence.

Despite running a constitutional referendum in 2018 to allow him to stand for two further seven-year terms, Mr Nkurunziza said he would stop contesting elections. He is expected to receive almost half a million euro, a luxury villa, and a lifetime salary when he steps down.

Instead, the ruling CNDD-FDD is backing former military general Evariste Ndayishimiye, the party’s secretary general, as its candidate. His main opponent is former militia leader Agathon Rwasa, who is aligned with the National Freedom Council (CNL).