Irritation with London over Brexit now bordering on anger 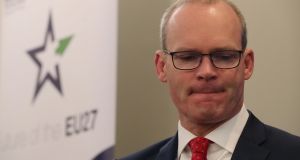 Tánaiste Simon Coveney on UK approach: “It’s like saying give me what I want or I’m jumping out the window.” Photograph: Niall Carson/PA Wire

Ahead of Tuesday’s votes in the House of Commons, Theresa May acknowledged there was a “limited appetite” in Brussels for renegotiating the withdrawal agreement and Downing Street was braced for a negative reaction. But the response from Dublin, Brussels and other European capitals on Wednesday went beyond a simple rejection of the prime minister’s call for a negotiation, reflecting a level of irritation with London that edges on anger.

Tánaiste Simon Coveney complained that May had recommended that her party should vote against a deal that she herself had negotiated.

“It’s like saying give me what I want or I’m jumping out the window. We owe it to the people of Ireland, north and south. We cannot approach this negotiation on the basis of threats,” he said.

Michel Barnier also criticised the prime minister’s retreat from her own deal, and he was equally contemptuous of the House of Commons’ vote for a non-binding amendment opposing a no-deal Brexit.

Austrian chancellor Sebastian Kurz, French president Emmanuel Macron and the official spokesman of German chancellor Angela Merkel all ruled out reopening the withdrawal agreement. And Juncker warned Britain against hoping that the EU would throw Ireland under the bus at the last minute.

By identifying the backstop as the sole obstacle to supporting the Brexit deal, however, Tuesday’s vote has the potential to open a door for May into further negotiations. Over the next few days, she will consult with MPs before formulating a proposal on the backstop to be presented to the EU early next week.

If May can limit her demands to proposals that are negotiable if not immediately acceptable to Brussels, she has at least a ghost of a chance of winning a hearing from EU leaders. Her task is complicated, however, by the unreasonable demands of her new-found allies among Conservative Brexiteers. And her promise to give MPs another chance to block a no-deal Brexit on February 14th offers EU leaders an incentive to do nothing at all for two weeks.