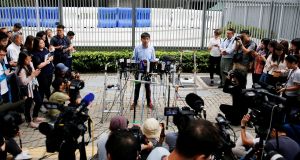 Hong Kong on Tuesday barred prominent activist Joshua Wong from running in upcoming local elections, a move that will fuel the anti-government protests that have wracked the city for the past five months.

In disqualifying Mr Wong from contesting next month’s district council elections, the government cited statements by his political party Demosisto that said the future of Hong Kong should be determined by its people, and independence was a possible option.

An official said all election candidates must uphold the Basic Law, which states the city is part of China, and comments promoting self-determination or independence were incompatible with that.

“The candidate cannot possibly comply with the requirements of the relevant electoral laws,” he said.

Mr Wong referred to the government officials as the “thought police”, and said the decision “proved how Beijing manipulates the election with political censorship and screening”.

The 23-year-old activist, who has been repeatedly arrested and jailed, sprang to prominence as a student leader in the 2014 pro-democracy Umbrella Movement. While he has maintained a lower profile in the recent protests, he has angered Beijing by visiting lawmakers in Washington, Berlin and Taipei recently to generate support for the demonstrators.

“Whether it is sending me to jail or disqualifying me from running in elections, it will not deter me from participating in the democratic movement,” he said. “This will only encourage more Hong Kong people to join the resistance and vote in the elections.”

Over the past three years Hong Kong authorities have banned several candidates in the run-up to elections for advocating independence, and ousted other elected lawmakers for mocking the oath of allegiance in the legislative chamber.

The disqualification of Mr Wong will likely only further incite the protesters, who claim the Beijing government is eroding their political rights.

The district council elections, which will take place on November 24th, have taken on a broader significance than normal this year, with the pro-democracy camp hoping to channel the momentum from the protests into electoral gains.

With the crisis in deadlock, Hong Kong’s chief executive Carrie Lam said on Tuesday that she would be unable to engage in political dialogue with the protesters until the violence stopped.

“For the government to resort to measures that will appease the violent rioters, I don’t think that is the solution,” she said. “The first thing must be to stop the violence. If there is a large number of people legitimising the violence, or even glorifying the violence, I’m afraid it will make it much more difficult for us to tackle the situation.”

The financial hub’s economy is on the brink of a recession, she said, badly hit by the months of violence on the streets.

“Our current assessment is that the full year of 2019 will likely show negative growth,” she said. “The situation is very grim.”