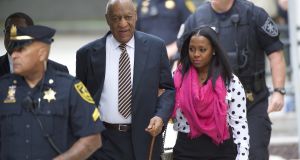 Bill Cosby arrives with actress Keshia Knight Pulliam, who played his youngest daughter in The Cosby Show, at the Montgomery County Courthouse before the opening of the sexual assault trail. Photograph: Mark Makela/Getty

The first witness to testify in Bill Cosby’s sexual assault trial said on Monday that the comedian had drugged her before sexually abusing her in 1998 – the same method prosecutors say he used in the alleged 2004 attack that he is on trial for.

Cosby, once one of the most beloved entertainers in the United States, is accused in both instances of inviting a young woman to visit him for career advice, offering her pills that he said would help her “relax” and then sexually abusing her once she was incapacitated by the drug.

The 79-year-old entertainer is charged with sexually assaulting Andrea Constand, an employee of his alma mater Temple University, at his home in the Philadelphia suburbs in 2004. Ms Constand is one of dozens of women who have accused Cosby of sex assault but hers is the only case recent enough to be subject to criminal prosecution.

The allegations, all of which Cosby has denied, have essentially ended his long career. The first witness at his trial, Kelly Johnson, described an incident that she said took place at Cosby’s hotel suite in Los Angeles in 1996. Her emotional testimony was intended to persuade jurors that Cosby demonstrated a pattern of behavior when he allegedly attacked Ms Constand in 2004.

A tearful Ms Johnson, who worked at the time for Cosby’s agent, said she initially hid the pill under her tongue but that Cosby checked to see if she had swallowed it. She later woke up disoriented and partially clothed in Cosby’s bed with the comedian behind her, grunting, before he forced her to touch his genitals, she testified. “I was trying to say something,” she said. “I don’t know if I was actually speaking.”

In a potential preview of what Ms Constand can expect when she testifies, Cosby’s lawyer, Brian McMonagle, fired aggressive questions laced with sarcasm at Ms Johnson. He claimed she offered much different details during a 1996 deposition, including that the assault occurred in 1990, six years earlier than she testified on Monday.

He also suggested she used drugs in the 1990s, which she denied, and accused her of having “selective amnesia” after she could not recall details of her deposition or her medical leave from her employer following the Cosby incident.

Cosby, once known as “America’s dad” for his role as Heathcliff Huxtable on the 1980s hit TV series The Cosby Show, walked into court on the arm of Keshia Knight Pulliam, who played his youngest daughter, the pigtailed Rudy Huxtable. His wife and business manager, Camille Cosby, was not seen in court on Monday. Like Ms Johnson, Ms Constand will testify that Cosby told her the pills he offered would help her “relax” before assaulting her, assistant district attorney Kristen Feden said in her opening statement on Monday.

In his opening statement, Mr McMonagle said Cosby is the victim of false accusations. He pointed out that Ms Constand’s initial allegations were investigated in 2005 and found to be insufficient at that time. “Today I get a chance, with your help, to right a wrong,” he told jurors.

Mr McMonagle told jurors that Ms Constand’s story suffered from numerous inconsistencies in her accounts to police in 2005. Ms Constand, who did not report the alleged assault for nearly a year, said she had not maintained contact with Cosby after the incident. In fact, Mr McMonagle said, she called him 53 times.