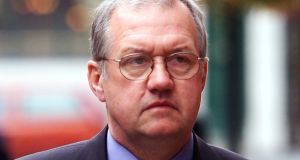 Retired police officer David Duckenfield will face trial for the manslaughter by gross negligence of 95 football supporters at Hillsborough after a judge at Preston Crown Court ruled to lift a stay on his prosecution. File photograph: Phil Noble/PA Wire

The police officer in command at Hillsborough stadium when dozens of football fans died will go on trial for manslaughter almost 30 years after the disaster. David Duckenfield will face trial on 95 counts of manslaughter by gross negligence after a judge lifted an order imposed 18 years ago preventing his prosecution.

Mr Duckenfield (73), a former South Yorkshire police chief superintendent, was the match commander at the 1989 FA Cup semi-final between Liverpool and Nottingham Forest when 96 football fans were killed. One of the victims died some years after he was injured in the incident.

Peter Openshaw, a judge at Preston Crown Court, on Friday lifted a stay on prosecuting Mr Duckenfield which was imposed in 2000 after a private prosecution by bereaved families.

“In respect of the defendant David Duckenfield I lift the stay. I confirm that I grant the voluntary bill of indictment to allow prosecution for manslaughter to proceed. I decline to order a stay on that charge,” Sir Peter said.

The judge ruled that four other men can also go on trial in connection with the disaster. Graham Mackrell (68) the former secretary of Sheffield Wednesday football club, which is based at Hillsborough, faces two criminal charges for alleged breaches of safety legislation and his duties as the club’s safety officer.

Retired police officers Donald Denton (80) and Alan Foster (71), and retired solicitor Peter Metcalf (68) who acted for the police after the disaster will go on trial charged with intending to pervert the course of justice.

An inquest in 2016 found that the 96 football fans crushed to death at Hillsborough were killed unlawfully and jurors found that Mr Duckenfield was guilty of gross negligence which led to the unlawful killings. They blamed Sheffield Wednesday for providing too few turnstiles for the capacity crowd at the match. Errors by police and ambulance services contributed to the deaths, almost all of which were caused by compression and asphyxia.

The decision to put Mr Duckenfield and others on trial in connection with the disaster follows a decades-long campaign by the victims’ relatives. An inquest in 1991, two years after the disaster, returned a verdict of accidental death, which the families succeeded in having overturned more than 20 years later, following the publication of an independent report on what happened at Hillsborough.

Last year, the Crown Prosecution Service (CPS) decided to prosecute Mr Duckenfield for his role in policing the event and applied to lift the stay imposed in 2000. The CPS also wants to prosecute former Merseyside and West Yorkshire chief constable Sir Norman Bettison, for misconduct in a public office, but proceedings concerning him were adjourned until 21 August.

Sue Hemming, head of the Special Crime and Counter Terrorism Division at

“It is intended his case will be heard alongside that of Graham Mackrell at Preston Crown Court later this year. Donald Denton, Alan Foster and Peter Metcalf are scheduled to stand trial in 2019,” she said.