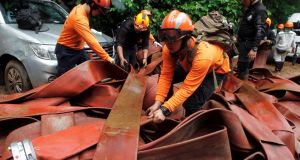 Thai workers prepare a rubber hose to be used with a pump to reduce the water level inside a cave where football players and their coach are missing in Chiang Rai province. Photograph: EPA

Thai authorities said on Thursday that they believed members of a youth soccer team trapped in a flooded cave complex may have reached a large, dry cavern and officials were considering drilling through the mountaintop to reach them.

With the search for the team growing ever more urgent and complex on its sixth day, Lt Gen Kraiboon Suadsong, commissioner of the Police Strategy Office, said a team would first try drilling a small hole through the rock above the cavern to allow a camera to be lowered in.

“We will drill and use an infrared camera that can take photos,” he said. “We know the spot where we should be drilling.”

Lt Gen Kraiboon said crews had tripled the volume of water being pumped from the interior of the flooded cave system, which could help make its submerged passageways accessible. The search for the 12 boys, aged 11 to 16, and their coach, Ekkapol Chantawong (25), has captivated Thailand and brought together a polarised nation in the hope the boys could be rescued from Tham Luang Cave, a popular attraction in northern Thailand.

Among those aiding the search efforts is a team of 17 US Air Force rescue and survival specialists, who arrived early on Thursday from their base in Okinawa, Japan.

“The team is assessing the environment and developing courses of action,” said Jillian Bonnardeaux, of the US embassy in Bangkok. “All options for rescue operations are being considered in close co-ordination with Thai rescue personnel.”

Three cave divers from Britain have also joined the search. Near the cave, at the nearby headquarters of Tham Luang-Khun Nam Nang Non Forest Park, more than 50 family members waited for word of the missing. Close by, many hundreds of soldiers, park rangers and workers from a dozen government agencies provided support services or stood by in the thick mud waiting for their next assignment. Dozens of journalists were on hand to record the progress of the search.

The soccer players and their coach went to the cave Saturday afternoon after their team practice, riding their bikes past a sign warning visitors not to enter the cave from July to November because of the danger of flooding during the rainy season. It also says visitors must report to the national park ranger station before entering, which the group did not do, officials said.

Rain began falling after they were inside and rising water trapped them. At one point along the trail, some boys left their bags, officials said. At another, they left their shoes. Rescue workers, including Royal Thai Navy divers, have not been able to precisely locate the group within the vast cave complex despite repeated attempts, officials said.

At this stage, it is not clear how much of the cave, which extends about 11km, has been searched. Lt Gen Kraiboon said authorities had concluded that the athletes would have fled the rising water and made it to a cavern called Pattaya Beach, a well-known feature of the cave about 5km from the entrance.

“This spot is on higher ground and the spot is vast,” he said. “There’s enough air for them to breathe. We therefore assessed the situation that they should be in this spot.”

Gen Srivara Ransibrahmanakul, the deputy national police chief, met with experts at the cave and urged them to drill faster. “When you work on this, you don’t do a tryout,” he told them. “You do it once and make sure it works because they are waiting for us with hope.” He added, “It doesn’t matter how much we spend.”

As Thai officials worked on the drilling plan and three members of the US Air Force team inspected the cave, hundreds of soldiers continued efforts to reduce the water level. There was some progress a day earlier, when they discovered that water was draining through a previously unknown outlet, Lt Gen Kraiboon said. Earlier, the plan had been to pump the water out of the cave entrance, but now they can pump it out from both places.

Maj Gen Thana Turajane, a doctor and deputy director of the Police Hospital, said that he and his team were confident that the boys and their coach could still be alive, according to a statement released by his office. But the boys could be suffering from malnourishment and low body temperature, and two have asthma, the statement said.

Narongsak Osottanakorn, the governor of Chiang Rai province, told reporters on Wednesday evening that King Maha Vajiralongkorn Bodindradebayavarangkun was following the news closely. The king had noticed that many people had been working without protection from the rain and donated 2,000 raincoats.

“The king is very worried about us and our works,” the governor said. “But more important, he is so concerned about the boys.” The governor said that the search operation was making good progress but that he wanted results. “We hope that the kids are safe and wait for us,” he said. “And we hope that we will find them soon. I am not saying ‘soon’ as in days but rather ‘soon’ as in hours.” – New York Times