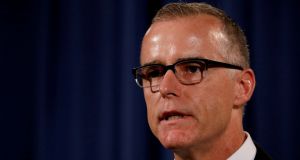 Donald Trump renewed his attack on Andrew McCabe on Monday, in response to an interview in which the former deputy FBI director discussed his new book and made claims damaging to the US president.

In the interview, broadcast by the CBS 60 Minutes programme on Sunday night, Mr McCabe referred again to discussions among top administration officials about whether Mr Trump could be removed from office under the 25th amendment, which allows the vice-president and the majority of the cabinet to strip the president’s powers if they determine he is unable to discharge the duties of his office.

Mr Trump had attacked Mr McCabe on Twitter on Thursday, when CBS released excerpts of the interview, and again on Sunday night, when it was broadcast in full. Before dawn on Monday – the President’s Day holiday in the US – he returned to the offensive.

“Wow,” Mr Trump tweeted. “So many lies by now disgraced acting FBI director Andrew McCabe. He was fired for lying, and now his story gets even more deranged. He and Rod Rosenstein, who was hired by [former attorney general] Jeff Sessions (another beauty), look like they were planning a very illegal act, and got caught.

“There is a lot of explaining to do to the millions of people who had just elected a president who they really like and who has done a great job for them with the Military, Vets, Economy and so much more. This was the illegal and treasonous ‘insurance policy’ in full action!”

Mr Trump’s reference to an “insurance policy” was to a text message sent by Peter Strzok, an FBI agent, to a bureau lawyer, Lisa Page, about the Russia investigation and Mr Trump’s chances of winning the White House.

On CBS, Mr McCabe said deputy attorney general Rod Rosenstein had brought up the possibility of removing Mr Trump using the 25th amendment, which allows the vice-president and a majority of the cabinet to deem a president unfit to perform his duties.

Mr McCabe says the discussion took place in the days following Mr Trump’s firing of James Comey as FBI director in May 2017.

“It was an unbelievably stressful time,” Mr McCabe said. “I can’t even describe for you how many things must have been coursing through the deputy attorney general’s mind at that point. So it was really something that he kinda threw out in a very frenzied chaotic conversation.”

Wow, so many lies by now disgraced acting FBI Director Andrew McCabe. He was fired for lying, and now his story gets even more deranged. He and Rod Rosenstein, who was hired by Jeff Sessions (another beauty), look like they were planning a very illegal act, and got caught.....

....There is a lot of explaining to do to the millions of people who had just elected a president who they really like and who has done a great job for them with the Military, Vets, Economy and so much more. This was the illegal and treasonous “insurance policy” in full action!

Mr Rosenstein also offered to wear a wire to record conversations with Mr Trump, McCabe said. “He said, ‘I never get searched when I go into the White House. I could easily wear a recording device. They wouldn’t know it was there.’ Now, he was not joking. He was absolutely serious.”

On Thursday, the Department of Justice said in a statement that Mr Rosenstein rejected McCabe’s version of events as “inaccurate and factually incorrect”.

Mr McCabe was fired by Mr Sessions in March 2018, just short of retirement and after repeated attacks by Mr Trump, including on his wife, a former Democratic candidate in Virginia. He was found to have “made an unauthorised disclosure to the news media and lacked candour” during an internal review of an investigation into the Clinton Foundation. Mr McCabe denies that charge, over which he may yet be prosecuted.

In his book, The Threat: How the FBI Protects America in the Age of Terror and Trump, he offers an unflattering portrayal of Mr Sessions, who resigned after the midterm elections.

Mr McCabe told CBS that Mr Rosenstein was told by Mr Trump to write a memo justifying the firing of Mr Comey.

“Rod was concerned by his interactions with the president, who seemed to be very focused on firing the director and saying things like, ‘Make sure you put Russia in your memo.’ That concerned Rod in the same way that it concerned me and the FBI investigators on the Russia case,” Mr McCabe said.

“If deputy attorney general Rosenstein listed the Russia investigation in his memo to the White House, it could look like he was obstructing the Russia probe by suggesting Comey’s firing. And by implication, it would give the president cover.”

Mr Rosenstein, Mr McCabe said, “explained to the president that he did not need Russia in his memo. And the president responded, ‘I understand that, I am asking you to put Russia in the memo anyway’”.

Publicly, shortly after Mr Comey’s firing, Mr Trump told NBC he had done it because of “this Russia thing”. He also invited a group of Russian diplomats into the Oval Office and told them: “I just fired the head of the FBI. He was crazy, a real nut job. I faced great pressure because of Russia. That’s taken off.”

Mr McCabe told CBS: “The president had gone to Jim Comey and specifically asked him to discontinue the investigation of [the former national security adviser] Mike Flynn, which was a part of our Russia case. The president, then, fired the director.

“In the firing of the director, the president specifically asked Rod Rosenstein to write the memo justifying the firing and told Rod to include Russia in the memo. Rod, of course, did not do that. That was on the president’s mind.

“Then, the president made those public comments that you’ve referenced both on NBC and to the Russians, which was captured in the Oval Office. Put together, these circumstances were articulable facts that indicated that a crime may have been committed.

“The president may have been engaged in obstruction of justice in the firing of Jim Comey.”

The special counsel Robert Mueller, appointed after the Comey firing, is believed to be close to issuing his final report on Russian election interference, links between Trump aides and Moscow and possible obstruction of justice by the president.

Mr Trump denies collusion with Russia and has repeatedly called the investigation a “witch-hunt”. On Sunday he alleged “real collusion” among TV networks producing critical or mocking coverage of him, specifically in actor Alec Baldwin’s impersonation of him on Saturday Night Live.

In Congress, political battle is intensifying. Democrats in the House are promising to investigate the president. Republicans in the Senate are vowing to fight back.

On CBS, Mr McCabe was asked how he could remember conversations with Mr Trump well enough to put them in a book. Like any good FBI agent, he said, he had written memos at the time.

Asked where those documents were now, he said: “Those memos are in the custody of the special counsel’s team.”– Guardian