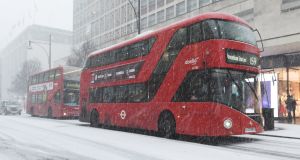 Four people have been killed in separate crashes in Lincolnshire and Cambridgeshire as wintry conditions have swept across Britain.

Snowfall across the island made driving conditions treacherous, caused disruption to rail and air transport networks and forced hundreds of schools to close. Yet more snow is forecast for the rest of the week.

“Sadly, three people have lost their lives this morning and several people have faced the shock of witnessing or coming across the scene,” said Lincolnshire police sergeant Helen Alcock on Tuesday, referring to the first of the two fatal collisions.

Police appealed for witnesses to the incident, which involved a blue Renault Clio and a white Scania lorry and occurred on the A15 shortly after 6am, to come forward.

That was one of 20 crashes within three hours on Lincolnshire’s roads, which also included one involving a school bus with 45 pupils on board, police said. The children were unharmed after their bus collided with a car and veered off the road near Deeping St James.

In Cambridgeshire, officers said another man died in a crash involving three vehicles on the A47 near Peterborough shortly before 10am.

Essex police said one person was injured in another incident after 17 cars were involved in a pile-up on the A120 between Colchester and Elmstead Market.

On the continent, at least eight people died as freezing temperatures and heavy snowfall swept across Europe from the east. Polish police said five died there as a result of temperatures that dropped as low as -22 degrees Celsius and three deaths were reported in Romania as blizzards battered the country.

In the UK, yellow warnings of snow remained in place for the rest of Tuesday, the Met Office said. And, while the more severe amber warnings put in place for Tuesday had expired, more were issued for later in the week.

The Met Office said several centimetres of snow fell in some parts of Britain on Monday night and into Tuesday morning – with between 3cm and 4cm in Newcastle and Northumberland. The lowest overnight temperature, of -8.9 degrees, was recorded in Farnborough, Hampshire.

Trains were affected by the snowfall, with cancellations and disruptions on lines across Britain. Southeastern, which operates in Kent, cancelled dozens of services, including several to London’s St Pancras, Victoria and Cannon Street stations. Other companies affected included Southern and Great Northern.

Meanwhile, British Airways cancelled dozens of flights from Heathrow airport, while easyJet warned that disruption to its flights was expected.

Forecasters had predicted 5cm to 10cm of snow in most areas of the UK, with the most snow likely to fall on high ground in Scotland.

Met Office forecaster Frank Saunders said parts of Britain could have their coldest spell of weather since at least 2013, and possibly since 1991. It was expected temperatures could reach as low as -15 degrees by midweek where there is snow on the ground, rivalling temperatures forecast for parts of northern Norway and Iceland.

From Thursday, forecasters predicted another weather system, Storm Emma, would bring blizzards, gales and sleet as it met the chilly “beast from the east”.

The storm was forecast to move north through Europe and was due to hit the UK on Thursday and Friday, bringing the risk of power cuts and transport delays. – Guardian