Boris Johnson tops poll in first round of Conservative race

Mark Harper, Esther McVey and Andrea Leadsom eliminated from contest to succeed May

Boris Johnson has received 114 out of 313 votes in the first poll to succeed Theresa May as Conservative leader, comfortably topping the poll ahead of his nearest challenger Jeremy Hunt on 43. Video: Reuters 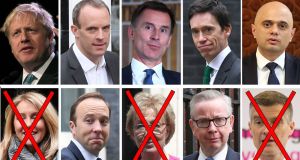 Boris Johnson has topped the ballot in the first round of voting in the Tory leadership race, with Mark Harper, Esther McVey and Andrea Leadsom eliminated from the contest.

Mr Johnson was the clear winner with 114 votes, 71 votes ahead of his nearest rival, foreign secretary Jeremy Hunt. A total of 313 MPs voted.

Mr Johnson, the favourite to succeed Theresa May as prime minister, said he was delighted to win the first ballot but that there was a long way to go.

“Thank you to my friends and colleagues in the Conservative & Unionist Party for your support,” he said on Twitter. “I am delighted to win the first ballot, but we have a long way to go.”

Three years since voting to leave the European Union, the United Kingdom is heading towards a possible crisis over Brexit, as most of the candidates vying to succeed Mrs May are prepared to leave the bloc on October 31st without a deal.

The result of the first round of voting was declared by the backbench 1922 Committee’s joint acting chairman, Dame Cheryl Gillan.

Leadership hopefuls needed at least 17 votes in the secret ballot to go through to the second round, with anyone below that threshold automatically eliminated.

Thank you to my friends and colleagues in the Conservative & Unionist Party for your support. I am delighted to win the first ballot, but we have a long way to go.https://t.co/tGRXu94CmT | @BackBoris pic.twitter.com/zVBNls2rew

Betting markets give Mr Johnson, who has a long record of scandals and gaffes, a 70 per cent probability of winning the top job.

The second round is due on June 18th, with further ballots planned for June 19th and June 20th until there are just two candidates. A postal ballot of the wider Conservative Party membership will then be held to pick a leader.

A new prime minister should be chosen by the end of July.

Mr Johnson, a 54-year-old former foreign minister and London mayor, kicked off his official campaign on Wednesday with a pledge to lead Britain out of the European Union on October 31st in any circumstance, as well as a warning to the Conservative Party that “delay means defeat”.

He said: “After three years and two missed deadlines, we must leave the EU on October 31st.

“I am not aiming for a no-deal outcome.”

Johnson has spent weeks wooing Conservative politicians, staying out of the spotlight with a low-key campaign at odds with his flamboyant publicity stunts of the past.

Some were quick to make veiled warnings about the frontrunner following the results of the first round. Mr Hunt, who has pitched himself as a unifier of both Brexit-supporting and pro-EU Conservatives, warned members of the party that “the stakes have rarely been higher for our country”. “This serious moment calls for a serious leader,” he tweeted.

Meanwhile, Mr Stewart, who was unexpectedly catapulted into the next round of the contest, vowed he would set up “an alternative parliament” should Mr Johnson suspend parliament to pursue a no-deal Brexit.

He said he and other MPs would be prepared to “bring him down” if Mr Johnson attempted to prorogue parliament. “If he were to try, I and every other member of parliament will sit across the road in Methodist Central Hall and we will hold our own session of parliament,” he said.

Before the vote, Ms Leadsom said she was feeling “very positive and optimistic and hopeful that I will be getting enough support from colleagues to go through to the next round”.

Former work and pensions secretary Esther McVey had said: “I’m the outsider, I know that.”

Asked who she would urge her supporters to back if she was eliminated, she said: “I’m not answering that yet.”

Mr Gove said he had voted for the “best candidate”. – Reuters/PA/Guardian