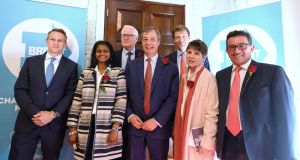 Launching his Brexit Party’s latest candidates for next month’s European Parliament elections in London on Tuesday, Nigel Farage was full of confidence – and with good reason. Only a few weeks old, the party looks set to win the elections, with YouGov putting it on 27 per cent, compared to 22 per cent for Labour and just 15 per cent for the Conservatives.

Farage said the Brexit Party had done so well in attracting Conservatives and supporters of his former party Ukip that he would spend most of the campaign in Labour heartlands like south Wales, the midlands and the north of England.

“There are five million people that voted for Jeremy Corbyn and voted for Brexit as well, and that’s going to be our task. I think we will go on squeezing the Conservatives and squeezing Ukip down to virtually nothing. We’re going to go after that Labour vote in a very big way,” he said.

The supporters who crammed into an upstairs room in William Gladstone’s former home overlooking the Mall were mostly male and over 50. But the five candidates Farage introduced were ostentatiously diverse, with broadcaster and pundit Claire Fox presenting herself as a voice of the left.

“I’ve spent my whole life fighting for left-wing causes, so there’s no one more surprised than me to be standing as a candidate for Nigel Farage’s Brexit Party,” she said.

Like many of her former comrades in the Revolutionary Communist Party (RCP), Fox has travelled a path from the Trotskyist left to the libertarian right, contributing to the contrarian online journal Spiked and running the Institute of Ideas, a libertarian right think tank.

Fox accused Labour and the Conservatives of treating their voters who backed Brexit with “utter, sneering contempt” and of seeking to overturn the result of the 2016 referendum.

“I will be damned to let the establishment get away with this road to vandalism. I am standing for democracy and for decent Remain voters who respected the vote,” she said.

“I have never been seriously worried about the future of our country but I am now. Our political system is a joke. It is a worldwide joke. They are laughing at us – not with us, at us,” Esler said.

The d’Hondt method of proportional representation used for European Parliament elections in England, Scotland and Wales is a party list system that tends to favour larger parties. The number of seats each constituency elects ranges from three to 10 and, in the smaller-seat constituencies, a party list needs to pass a threshold of up to 20 per cent to be sure of winning a seat.

If the three pro-Remain parties formed a joint list, their 25 per cent in the polls would put them just behind the Brexit Party with the chance of winning dozens of seats. Splintered, they are likely to pick up only a handful, and Change UK could end up with none at all, a potentially fatal blow to a party that faces the likely loss of all its MPs at the next general election.