UK must suffer knockout blow if EU is to thrive 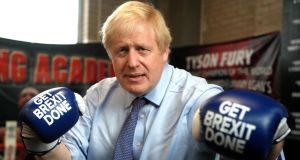 British prime minister Boris Johnson during a stop on his general election campaign trail at a boxing academy in Manchester on Tuesday. Photograph: Frank Augstein/Getty Images

In Brussels, Brexit is usually presented as a lose-lose game in which the inevitable pain will be spread unevenly. Terminal for the United Kingdom, serious but not life-threatening for the European Union, and potentially requiring a short stay in intensive care for Ireland.

The reality is that the excruciatingly grinding nature of Brexit since 2016 has resulted in a European mindset focused on the implosion of British political norms and the collapse of British influence in Brussels. Feelings reinforced by the almost surreal nature of the current UK election campaign. In comparison, the EU has come to represent a legalistic behemoth – slow-moving but relatively united – a creature destined for steady but unspectacular growth in the decades ahead.

But behind this veneer a more honest appraisal of the impact of Brexit on the EU is beginning to emerge. And deep down, Europe knows her vulnerabilities have never been greater.

Put simply, Europe continues to underestimate British abilities to adapt, and possibly even thrive, in a post-EU environment. Brexit may well be an obscene act of economic self-harm, but that does not preclude the probability that Britain will remain a powerful economic and political actor on the world stage. In so doing, Britain will be a most serious competitor for Europe irrespective of what kind of Brexit actually occurs.

That is why, for Europe to thrive, Brexit Britain must fail (and fail badly).

Viewed through the prism of a continental lens, Brexit Britain will be a Ryanair-style competitor to the EU’s established Lufthansa brand. A wild jungle of unrestrained, US-style capitalism filled with exploited and vulnerable workers. This bizarre type of socioeconomic superiority fills the narrative of unrestrained Anglo-Saxon capitalism. Unfortunately, for the EU, this view is factually incorrect and more than a little moored in cultural chauvinism.

Did you ever wonder why so many workers from central and Eastern European member states flock to work in Britain (and Ireland)? Why English is the dominant language in the EU even though it will not even be an official language of any member state after Brexit? Or why President Emmanuel Macron, before his gillets jaune walk-back, sought to implement classical Anglo-Saxon economic policies – smaller state, lower business taxes and increased labour market flexibility?

It’s because the Anglosphere (led by the US with Britain in tow) understands that globalisation is like going to a drug rehab centre; there can be no half measures, no piecemeal commitment: you must be in it to win it. And the US and Britain have succeeded in shaping the framework of modern, capitalist, democratic societies. Nobody dreams of implementing the Belgian or Italian economic models, or of replicating German fiscal angst.

And therein lies the real worry for the EU. Brexit Britain’s quest for a global niche is achievable, probably likely, if adopted in a collaborative framework with the US, China and India. That does not mean that Brexit – of whatever shade – will not have huge negative impacts on Britain – that much is obvious. But what Europe has failed to understand is that Brexit Britain doesn’t want to reorient British business to compete with the EU as an offshore raider. Rather, it seeks to double down on globalisation and reinforce Britain’s role as a location for global business. The protection of British business died with Thatcher, whereas in Europe it lingers like the odour of a bygone era.

The EU has also fatally overlooked two characteristics of the British economy that will help it mitigate the immediate negative impacts of Brexit. First, Britain – like all Anglo-Saxon economies – looks aghast at the oversized role of government in continental states. British public spending as a proportion of their economy stands at under 40 per cent (even less in Ireland). The French spend in excess of 50 per cent, the Germans about 45 per cent. Britain can easily sustain a massive increase in public expenditure (as now proposed by both the Tories and Labour) to help offset the immediate Brexit drain.

Second, Europe has underestimated the ability of Britain to sustain a global reach based on its historic experience. There are literally dozens of niche areas that the City of London could utilise in their quest to retain, and even enhance, their location as a global financial centre irrespective of their future relationship with the EU. Take fintech – technology-enabled innovation in the financial sector. While the EU dawdles, London is already the only globally important fintech centre (number four in the world) in Europe. Global collaboration with key Chinese, southeast Asian and US competitors will likely be the post-withdrawal strategy of any UK government in this area any many others.

Ultimately, the dawning obsession in Brussels about the nature of the future EU-UK trading relationship is irrelevant. It is based on an image of Britain viewed solely through the lens of the legalistic and technocratic EU single market. It also underestimates the global aspirations of the Anglo-Saxon economic model and the advantages Britain retains in its quest for a global niche. Brexit will have a detrimental impact upon Britain, but the longer-term impact of a successful Britain on Europe may be just as serious. That is why, for Europe to thrive, Brexit Britain must fail (and fail badly).

Eoin Drea is a researcher at the Wilfried Martens Centre, the official think tank of the European People’s Party which includes Fine Gael

1 Urgent report on Dublin eviction ordered by Deputy Garda Commissioner
2 Anne Doyle: ‘Depression? I know what it is, and it’s a b*tch’
3 A million trees, including 400,000 oaks, to be destroyed this week
4 36 hours on Northern Ireland’s Causeway Coast: ‘Everyone is having a wild time’
5 Cousins went paddle boarding at Furbo as usual location was cut off due to Covid-19
Real news has value SUBSCRIBE