David Davis under fire for handing over edited Brexit reports 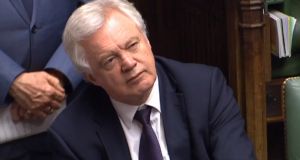 Brexit secretary David Davis has been accused of holding parliament in contempt after he refused to hand over unedited assessments of the impact of Brexit on 58 economic sectors.

Commons speaker John Bercow said Mr Davis must explain his conduct to MPs without delay as Labour’s shadow Brexit secretary accused the British government of ignoring a parliamentary vote to release the documents in full.

“Whether he is in contempt of parliament is a matter we will come to at some later date, but he is certainly treating parliament with contempt,” Sir Keir said.

The row came as the Daily Telegraph reported that Britain and the European Union have reached agreement on the Brexit divorce bill, with London expected to pay more than €50 billion. The paper reports that, although the two sides have agreed a methodology to calculate it, the final sum will only be agreed at the end of negotiations.

The divorce bill is one of three priorities in the first negotiating phase, along with the rights of EU citizens in Britain and British citizens in the EU, and the impact of Brexit on Ireland. The EU insists that talks cannot move on to the next stage, the future relationship between Britain and the EU, until “sufficient progress” has been made on all three priorities.

The two sides are close to agreement on citizens’ rights and an agreement on the divorce bill would leave the future of the Border as the biggest obstacle in the way of agreeing next month to move on to the next phase of talks. British, Irish and EU officials are working intensively on finding agreement on a form of words that will satisfy the EU’s – and Ireland’s – demand that Britain should give a meaningful commitment to avoiding a hard Border after Brexit.

Theresa May’s government has acknowledged that more progress is needed before next month’s EU summit and former foreign secretary and Conservative leader William Hague suggested on Tuesday that Britain must acknowledge that Northern Ireland’s circumstances are unique.

Writing in the Telegraph, Lord Hague said it should be possible to find a form of words that constitutes a written guarantee of Britain’s commitment to find specific and detailed solutions to the issues raised by Brexit for the North.

“Any solution must flow from the Belfast Agreement and what is needed to uphold it in its entirety. But sweeping solutions are unlikely to deliver that: what is required is a granular matching of problem with solution, in the light of what matters in practice on the island of Ireland. That will entail some flexibility from the UK, but also from the EU on how rigidly it regards its rules – and given what is at stake here, those with a sense of responsibility in the EU should be ready for that,” he wrote.

Two Brexit ministers will appear before the Northern Ireland Affairs Committee on Wednesday to answer questions about the future of the Border after Brexit.