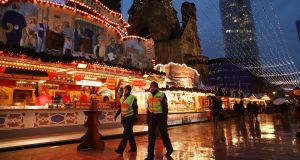 Two policewomen walk among stalls at the annual Christmas market on its opening day at Breitscheidplatz, a year after 11 people were killed in a terrorist attack. Photograph: Sean Gallup/Getty

A year after terror struck, the Christmas market on Berlin’s Breitscheidplatz opened again for business on Monday.

At first glance it was business as usual, with the twinkling lights and the whiff of roasted almonds mixed with mulled wine.

But now the entire market, on a large traffic island in western Berlin, is framed by two-metre long, 500kg concrete barriers, and the lingering shadow of tragedy.

On December 19th, 2016, a failed Tunisian asylum seeker and Islamic State sympathiser, Anis Amri (24), stole an articulated lorry and ploughed into booths in the market.

The attack killed 11 at the scene; Amri also killed the driver of the stolen truck and was himself shot dead in a gunfight with police in Italy.

Unseen to the casual eye are additional security measures that the Berlin police refuse to discuss.

Entering the market, every bag is checked, bigger bags and suitcases are banned entirely. There were no queues to get in on Monday but the additional security measures brought a “repressive feeling”, according to local woman Andrea Schneider.

“The presence of police everywhere gives me the impression that we are in danger,” she said.

But stand-owner Louisa Rietdorf says she has no concerns, and is happy to see the barriers in place. “Luckily my stand was on the other side of the square last year but of course it was still a huge shock,” she said.   Opening the market with a special religious service, Pastor Marin Gerner of the adjacent memorial church praised the security efforts of the city and police. “At the end of the day something can happen everywhere,” he said, “but the presence of the police gives me a good feeling.   Market managers say stand bookings are steady but they have increased stand rents by 20 per cent to pay for the additional security measures.  Visiting the market on Monday, Germany’s acting federal interior minister, Thomas de Maiziere, urged people to be “attentive but not fearful”. “The Christmas markets are part of our lives and our culture,” he said.

Despite the show of calm, tensions are running high since last week when six men were arrested over an alleged plot to attack a market in the western city of Essen.

Grave police errors in observing Amri, and in the post-attack investigations, are now the subject of two separate parliamentary investigations. It emerged after the attacks that Amri, who came to Germany from Italy in 2015, used at least 14 aliases to claim multiple social welfare payments. He visited a known radical mosque and sold drugs, but was observed only part-time by Berlin police.

The western Berlin market will close on December 19th, the anniversary of the attack, for a memorial service. The city will then unveil a memorial to the attacks: a bronze crack inserted into the pavement and, on the steps leading to the church, the names of the victims.